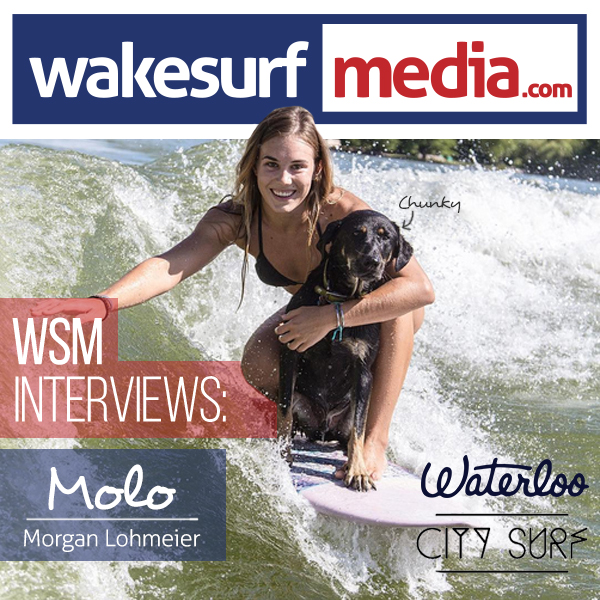 Morgan: My name is Morgan Lohmeier, but most people call me MOLO. I’m from Arizona, but I’ve lived in Austin, Texas for the last 10 years! I’ve been wakesurfing for about 6 years!

WSM: For the folks at home, how do you pronounce your last name? Is it Low-meyer? Low-meer?

WSM: We’ve seen some footage of you shredding at the Austin cableparks on a wakeboard. Do you prefer surfing over wakeboardering? Or, do you enjoy them equally for different reasons?

Morgan: I enjoy them both equally. I really love the variety and intensity of wakeboarding and hitting obstacles at the cablepark. However, I also love the laid-back, surf style and freedom of wakesurfing. They’re both great and very different.

WSM: Being based in Austin, what’s your season like? Can you ride all year?

Morgan: Austin is a pretty rad city and the temperature can stay pretty mild in the winters. I ride year-round, and I’m blessed to have some awesome friends that don’t mind the chilly water in the winter either!

WSM: In 2018 do you plan on competing at any competitions?

Morgan: I’m not sure. I didn’t compete in wakesurfing this season, although I did compete in wakeboarding a bit. I have been doing more riding for the love of it and promoting the sport through videos and teaching lessons rather than chasing after competitions. I may try to compete more next season, but competitions in wakeboarding and wakesurfing tend to be very political and I’m not the biggest fan of that. 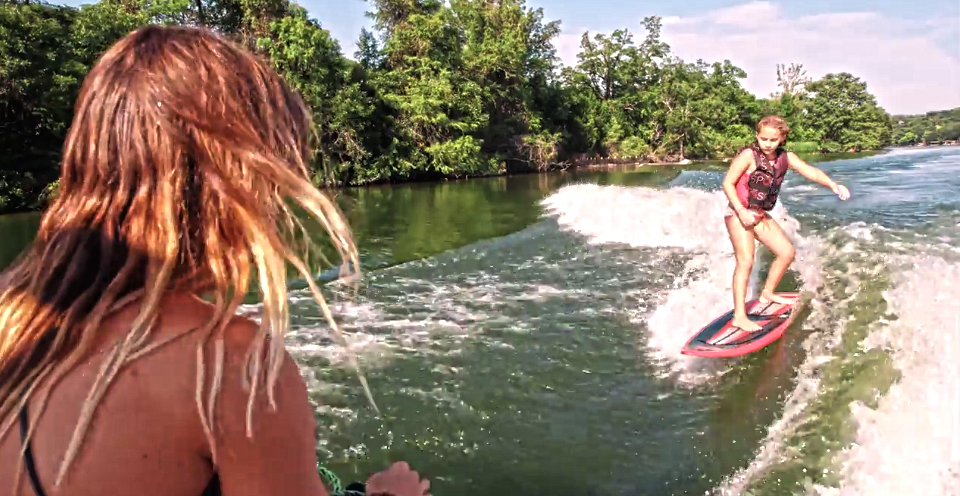 WSM: What as the first trick you learned and how long did it take you to stick it?

Morgan: The first trick I learned was probably a 360. It is one of those tricks that takes months of trying to get it just once, and then you’re super stoked on it, but don’t land it again for weeks after that. It’s a frustrating trick at first and I still have some days where I will land only a few. Some days, I’ll stick them all… it’s kind of hit-or-miss.

WSM: Tell us about Chunky. How old is he? What kind of dog is he? Does he enjoy surfing with you?

Morgan: Ah, Chunky Monkey. He’s my favorite adventure buddy of all time. I rescued him from the shelter when he was a puppy, and I kept his name as “Chunky” because, at the time, I had a bulldog named Chubby and I thought it was meant to be. Now I don’t have Chubby so everyone wonders why my super lean pup is named Chunky. Oh well. He’s a lab/shepherd mix and he’s just over three years old. He travels with me everywhere and has always been super adaptable to any activity I take him along on. He loves hiking, following me when I snowboard, standing between my legs when I wakeboard at the cable, and even surfing behind the boat with me. He’s got them all down. Once he tries something for the first time he remembers the ropes. He’s super smart and I’m so blessed to have him as my companion!

WSM: When you’re out riding on Lake Austin who’s usually driving and on the boat with you? Is it a packed crew or just a few friends?

Morgan: It really depends. I usually go out with my best friend Baylie on her family’s boat, or my long-time surf sista Leigh on hers. Some days it’s a boat full of people and we just all have a blast, and other times it’s just two of us taking long progression sessions. It’s always a great time either way!

WSM: How long have you been riding for Waterloo and how did your sponsorship with them begin?

Morgan: I’ve been riding for Waterloo for about two years now, I think. I love working with a local shaper and having my own board model! They sell really well and I’m stoked about it.

WSM: Speaking of that pro model which is appropriately named the Molo, how many shapes did you go through before landing on the final product? Is it a board for everyone? Or only advanced level riders?

Morgan: Yes, the MOLO! I love this board. So, I sat down with my shaper and we designed and shaped about three boards before landing on the shape I truly loved. Everyone who rode it loved it too. It was a great board for anyone. We tried a new shape for a bit but I think we are going to go back to the original… it’s a classic now!

Morgan: Hmmmm. I think I would want to take Jennifer Lawrence out wakesurfing. She seems super down to earth and fun to hang with so I bet she’d have an awesome time out on the lake with my crew.

Morgan: I really like folky-indie type music. A lot of the music I listen to speaks about the outdoors, loving life, traveling, exploring, etc. and I love to hear it while I’m doing what I love.

WSM: Seeing as how we’re based out of New Braunfels we have a locals-only question for you. Have you seen any shows at Gruene Hall? If so, who was your favorite?

Morgan: Gosh, I have been wanting to see a show at Gruene Hall since I first moved to Texas 10 years ago! I freaking love Gruene! I visit for the atmosphere and food all the time, but I’ve yet to see a show there. It’s on my to-do list!
[Editor’s note: Sean McConnell at Gruene Hall might just change your life.]

Morgan: I would really like to see surf-style wakesurfing promote true “surf” style better. Lately, as far as the competitive side goes, wakesurfing has turned in to an all-around “who has the most tricks and spins” game. In ocean surfing, style is a HUGE factor. In wakesurfing, skim and surf styles have meshed, and the importance of style has been nearly forgotten. Sure, judges look at how clean tricks are landed, but when I’ve judged comps, there often haven’t even been sections to rate style on the scorecards anymore. This bums me out. I would love to see people get more stoked on style in the sports than the trick list people have. Tricks are cool and all… style is better. Style is unique and tricks are just that – tricks.

Morgan: My advice to anyone getting in to the sport would just be to have fun. Don’t take it seriously, seriously. It takes all the fun out when your sole focus is to stomp tons of tricks. Take your time. Ride the wave. Stay stoked. Progress when you can. It’s all about having a good time.

Morgan: Gosh, see this is where I lack when it comes to wakesurfing. I don’t have a big trick book. I guess I have a decent amount under my belt, but I somehow made it to the pro level without stomping tons of crazy tricks. I’ve been working on air reverses lately and backside 360’s. I am in no hurry to learn a ton of tricks, but I love getting new ones down!
[Editor’s note: Her trick book is plenty big, she’s being modest!]

Morgan: I would like to thank the Beebe family for including me on awesome surf trips with them and for always letting me hit the lake with them. I’d like to thank Leigh Fulkerson for always pushing me and loving the sport as much as I do, and putting over 1,000 hours on her boat with me. I’d also like to thank Waterloo and City Surf for sponsoring me and promoting me in this sport I love. There’s tons of others who I could thank, but they all know who they are! I really thank anyone who has been supportive of what I do.

We want to thank Morgan for giving WSM her time and we look forward to seeing more of her as she continues to progress in her career and push wakesurfing into the future!