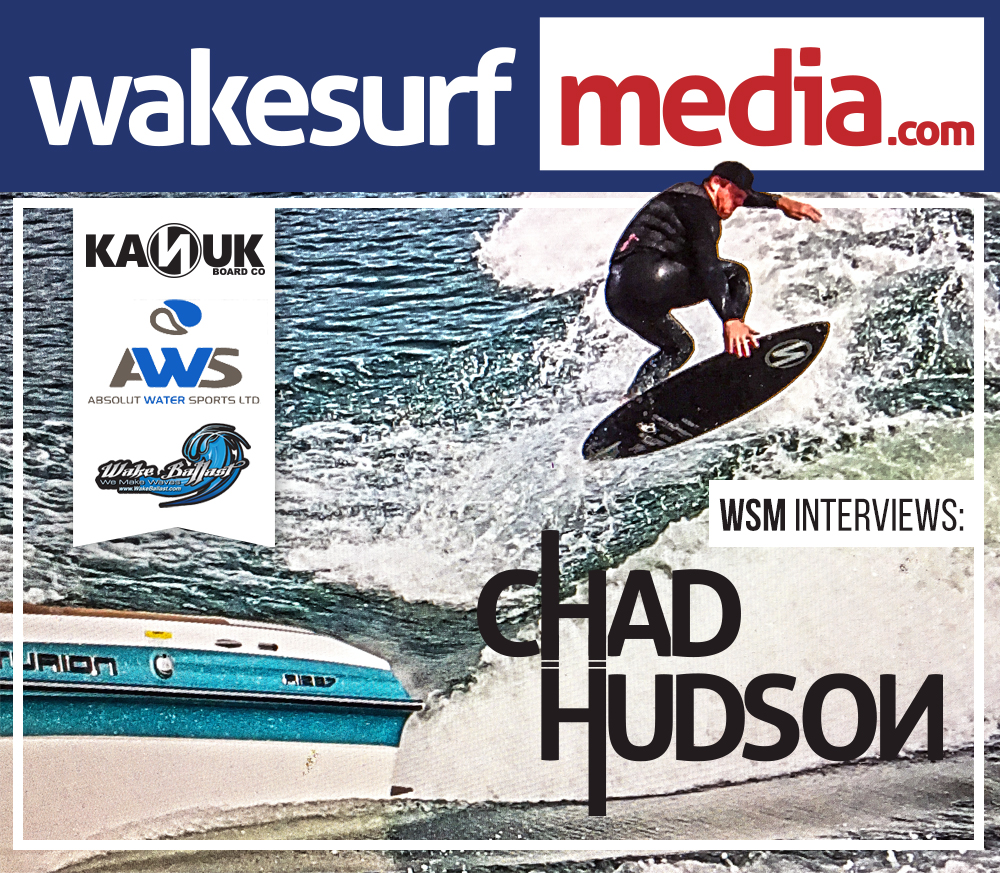 WSM: Prior to wakesurfing, were you doing any other boardsports?

Chad: I skateboarded a lot when I was younger and snowboarded.

Chad: Yeah, it was behind my friend Ashley’s old Mastercraft without ballast and I was hooked. Bought a boat that week.

WSM: There are a couple other Hudsons in the wakesurfing world, any relation? 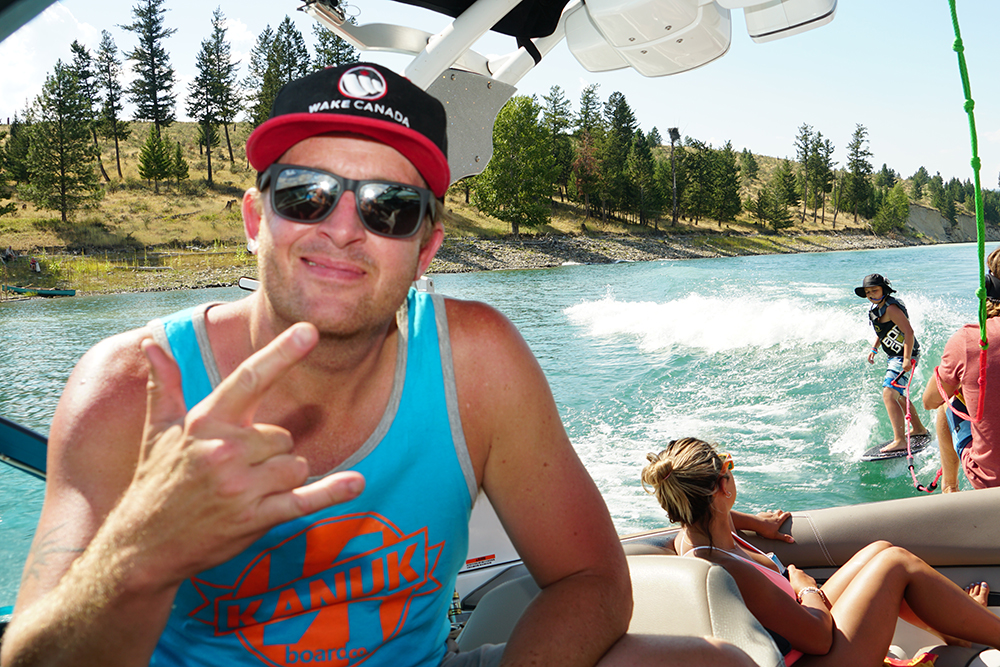 WSM: Take us through your warm up. When you get up for the first time on any given day, what tricks do you do?

Chad: Some stretches and a couple drinks [of… Gatorade… riiiiight] 🙂 I always check the wave with a slash and an alley-oop.

Chad: Caro Villeneuve from H2O School had me learn to ride switch first, then came frontside 180s and half-cabs. It opened the door to a lot more and I was grateful for her advice. She’s an excellent coach.

Chad: I always like to do my best but wouldn’t call me competitive. If I was, I wouldn’t invite all my competitors to ride with me all the time! I began competing to hang out with like-minded individuals. I’ve met some of my best friends through surfing. Like my Homies in Europe, Markus and Anthony! Or how about Jimmi, Keenan, Chris, Jesse, Dom, Aaron, Grant, Andersons (plural), Johnny, Sean, Isaac, Paul, … and on and on!

WSM: You recently won the first contest of the 2018 season in Arizona. How was the competition and what was your run like?

Chad: I had a blast! I love the people in Arizona and the fam and I spend lots of time there during the winter. The Burns, Gigueres, Babas, Vilands, Jones, Agate/Smith, Escorza, Marshs… so many amazing riders and people. The comp was blown out early in the day so we only had one pass but I rode ok. I always struggle a little behind the Nautique because I ride behind a very large Centurion. I thought it was super cool to ride in a combined division with the Surf Style riders including veterans like Trevor Miller and Bryce Wagner and the up-and-comer/soon-to-be-famous shredder, Dylan Ayala. It was a blast! Plus, I got to ride beforehand with my favs, the Sparlings.

WSM: Do you have a favorite event for the upcoming 2018 season? If so, where is it at and why?

Chad: I love the Canadian Competitions – Koocanusa for its uniqueness and the Centurion wave and Canadian Nationals because it’s in my backyard! Both comps are a blast, offer amazing caliber of riders, and are well attended.

WSM: We imagine you’ve been able to wakesurf in a few great spots, do you have a favorite and can you tell us why?

Chad: Lake Pleasant during the winter months because you have the lake to yourself and it’s a great place to hang out. During the summer there is no better lake than Koocanusa because it’s glass all day, every day. I also have a soft spot for Parker Arizona where I’ve had so many great surf memories.

WSM: Tell us about your sponsors. What’s your gear setup?

Chad: Kanuk Board Co., Absolut Watersports (my Centurion Dealer), and Wake Ballast. I ride a 53″ Kanuk Vedder carbon. It’s amazingly fast and light. My boat is a 2018 Centurion 257 – if you haven’t tried one, do it, it blows minds. I always add 500-750lbs of Wake Ballast because big waves are more fun than small waves! Plus, I don’t always have a full boat. Wetsuits are the Psycho One – it’s amazing. Sticky Bumps monkey wax – just a little.

WSM: How’d you originally get hooked up with Paul and the folks over at Kanuk?

Chad: Paul Laviolette and Codey Inman were looking for Canadian competitive wake surfers and they contacted me and the family. They committed to building us all boards we’d love and they delivered. Paul is amazing at translating the feedback he receives into re-shaping a board to make it better. In the past year we’ve got to spend some time together and he’s now a great friend.

Chad: Del the Funky Homosapien aka Deltron because not only is he an amazing rapper who belonged to the Gorillaz and Souls of Mischief, but he started skateboarding at 40. I think that’s rad and always respect my fellow O-Gs. 🙂

Chad: I’m currently serving my second term on the Competitive Wake Surf Association (CWSA) Board so I can help continue to grow competitive wake surfing. I want to help preserve the very positive culture and inclusiveness of the sport. The CWSA ridership includes riders from something like 29 countries and events were held in 9 countries in 2017. I’d like to see the World Series of Wakesurfing expand into South America, throughout Asia, and Australia so I can have friends in even more places! This year I’d like to see event organizers focusing on generating more photo and video content during their events to share with the rest of the community not in attendance. It also helps us learn new tricks by seeing what others are doing!

Chad: Sign up for a WRS Qualifying event or World Series event near you! You’ll meet new people to ride with which is key to developing. The 2018 schedule will be posted on the CWSA website so check it out at www.competitivewakesurfing.com/events

Chad: Mostly landing the ones I have on a bigger, steeper, and faster wave because it’s so much fun!

Chad: I’d like to thank Jon Shields and all the other hard working members of the CWSA for the work they do to help grow competitive wakesurfing. The same goes for all the event organizers, people like my wife Nicole Hudson, for all they do to make these events happen.

We want to thank Chad for giving WSM his time and we look forward to seeing more of him as he continues to progress in his career and push wakesurfing into the future!