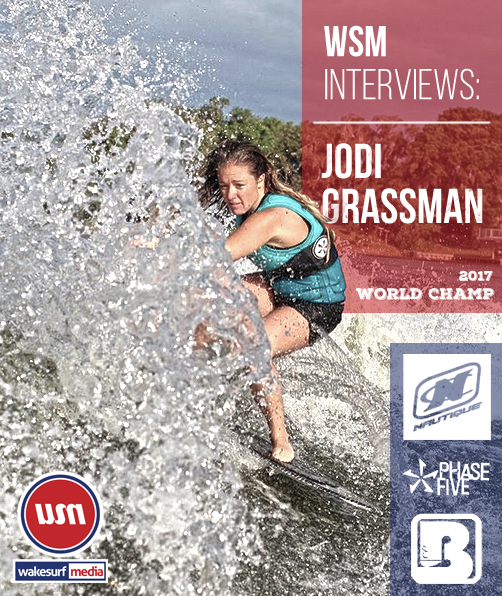 Jodi: My name is Jodi Grassman, I am from Lake Placid, Fl and I started wakesurfing 5 years ago.

Jodi: I grew up on the lake so I was doing all the watersports you could think of; slalom skiing, barefooting, kneeboarding, wakeboarding, wakeskating, etc. I competed a little in wakeboarding but when I discovered wakesurfing, my feet spend less and less time strapped in boots.

Jodi: I first saw wakesurfing on an online video. I showed my family because we are always down to try new things. We listed our boat and gave it a shot. I picked it up very quickly given my watersports background and learned how to stay in the wave because at the time it was very small and had no other choice. I was immediately drawn to it and would do circles around our lake for hours.

Jodi: When first discovering the sport, I finally figured out what that Phase 5 board was used for that has been sitting in our shed for 5 years collecting dust. After being pulled around my lake for hours every weekend, two months after learning I competed in my first competition. It was only a few hours away so I gave it a shot.

Jodi: Both. I am competitive with myself, I always want to improve my personal best and learn new things. I also began competing to meet the community and people who enjoyed the sport as much as I do. I also began competing to watch the skill level and what types of tricks were being done because I had no idea what was possible and I could take that knowledge back home and practice.

WSM: You recently earned the title of World Wakesurf Champion in the Pro Womens Skim Division at the WWSC in Kelowna, B.C. Going into the finals, were you confident that you would be at the top of the podium or did you feel the heat from the other competitors?

Jodi: I felt confident in a sense that I trained very hard for it but being a professional athlete you can never be certain you will be at the top. There is always the chance of having an off day.

Jodi: No I did not, I had fresh new pads on my Phase 5 Leeo, they work perfect for any temperature.

WSM: As a wakesurfer at the top of her game, have you landed any tricks that no other women have before?

Jodi: I started off with backside bigspins and improved to 540 bigspins and after many many attempts I finally landed a 540 shuv. which not only women, but not all of the men can do either. I push myself to become a better rider, not just a better female rider.

Jodi: I competed at the Arizona WS Open, Lake Anna WS Open, European WS Tour in Montpellier France, MNWSC, Canadian WS Nationals, and USA WS Nationals. I placed 1st in every contest except Lake Anna. In that contest, I was given a challenge by being the only skim rider and riding against the aggressive Ashley Kidd.

WSM: During the competition were you constantly thinking about throwing the 540 shuvit? Or was that always going to be a wildcard trick at the end of your run?

Jodi: I was not focusing on that trick too much. When I practice my runs at home I only throw it at the end of my run if I land my more consistent tricks first.

WSM: How long have you been a rider for Phase 5 and Nautique, and how did your relationship with them begin?

Jodi: I have been a rider for Phase 5 for about 5 years and a rider for Nautique for almost 3 years now. I actually knew Drew Danielo before I knew about wakesurfing. He was sponsored by a surf shop I always used to go to but didn’t know what for, after starting to wakesurf I contacted him and we started riding together. Before Nautique reached out to me, my family already owned a G21. I wouldn’t want to ride behind any other boat besides Nautique and that proves it. I was in complete shock when they contacted me. I have always thought of them as the best in the game so for them to want me on their team was such an honor.

WSM: How did you choose skim style vs surf? Is there a backstory behind it, or was that just what was available to learn on?

Jodi: The board that was collecting dust in my shed was a skim so that is what I used to learn on and start competing with. My sister actually won a surf style board at one of her wakeboarding contests but I loved the challenge of learning spins and shuvs so that is what I stuck with.

WSM: Are you an early riser to get the glassy water? Or do you take your chances and sleep in?

Jodi: I can usually only ride in the evening when my parents get home from work so I tend to sleep in a little bit. But if I have the chance to ride in the morning I take advantage of it.

Jodi: It is usually just my mom and I, jamming to Glass Animals and taking turns driving eachother.

WSM: What was the first CD or MP3 you ever bought… tell the truth!

Jodi: I couldn’t tell you the first but it was a wide range of 2000’s pop and hip-hop. From Green Day to Justin Timberlake to 50 Cent and everything in between.

Jodi: I listen to everything. Majority of the time it is artists like Glass Animals, The XX and Empire of the Sun. Sometimes I will switch it up to 90’s alternative rock or something more upbeat like rap. I don’t care for today’s pop music.

WSM: Where would you like to see wakesurfing go in the future? (something like more events, more divisions, less divisions, more vendors at contests, more online edits, or something completely of your own thoughts)

Jodi: What I notice is we do not get very many spectators which could be improved by more vendors and more publication around the area for the upcoming event. As for divisions, I think they are adequate. Although, the skill level of the amateur division is incredible I feel it may intimidate new and upcoming wakesurfers to the sport who want to compete. Maybe a novice division could bring in people who want to have fun and meet the community but are too nervous to ride against those competitors. Also, I believe the masters division should have their own divisions within it with how wide of a range the skill level is. I really like the LCQ addition to the scoring they used at worlds and I hope they use it more often. Overall, there can always be more friendliness between competitors and conversation between everyone. But in the few years I have been in the scene I have to say it has gotten drastically better, I find more people hanging out together instead of showing up to ride and then leave.

Jodi: I advise them to have fun. To progress, that is the best way. Do not let yourself or anyone push or stress you too much to the point where it is not enjoyable. Learn tricks on your own time and pace. Learn tricks from riders who you look up to, just remember, your attitude is projected onto your riding. Do not limit your self to a same gender role model, work toward the impossible and make it possible. I progressed at the rate I did by just having fun, not taking things so seriously and being told I am capable of doing anything if you work hard enough and set your mind to it.

Jodi: I am working on cutting some tricks out of my contest run to fit in tricks that I have gotten more consistent with such as my 540 bigspin and my air 360. I will be placing them more at the beginning of my run instead of throwing it at the end. I will keep practicing the 540 shuv to eventually get consistent with it. I would like to learn a bigger spin and also grow my variety to learning tricks switch and backside.

Jodi: I would love to thank my parents and everyone in my life who supports me. Everyone who keeps positivity in my life and always spreading the love. I wouldn’t be able to do the thing I love without my parents and sponsors. Thank you to Phase 5 Boards, Nautique Boats, and BoardCo.com; I wouldn’t want to represent anyone else.

We want to thank Jodi for visiting with us at WSM and we look forward to seeing more of her in the future as she continues to progress in her career and push wakesurfing into the future!