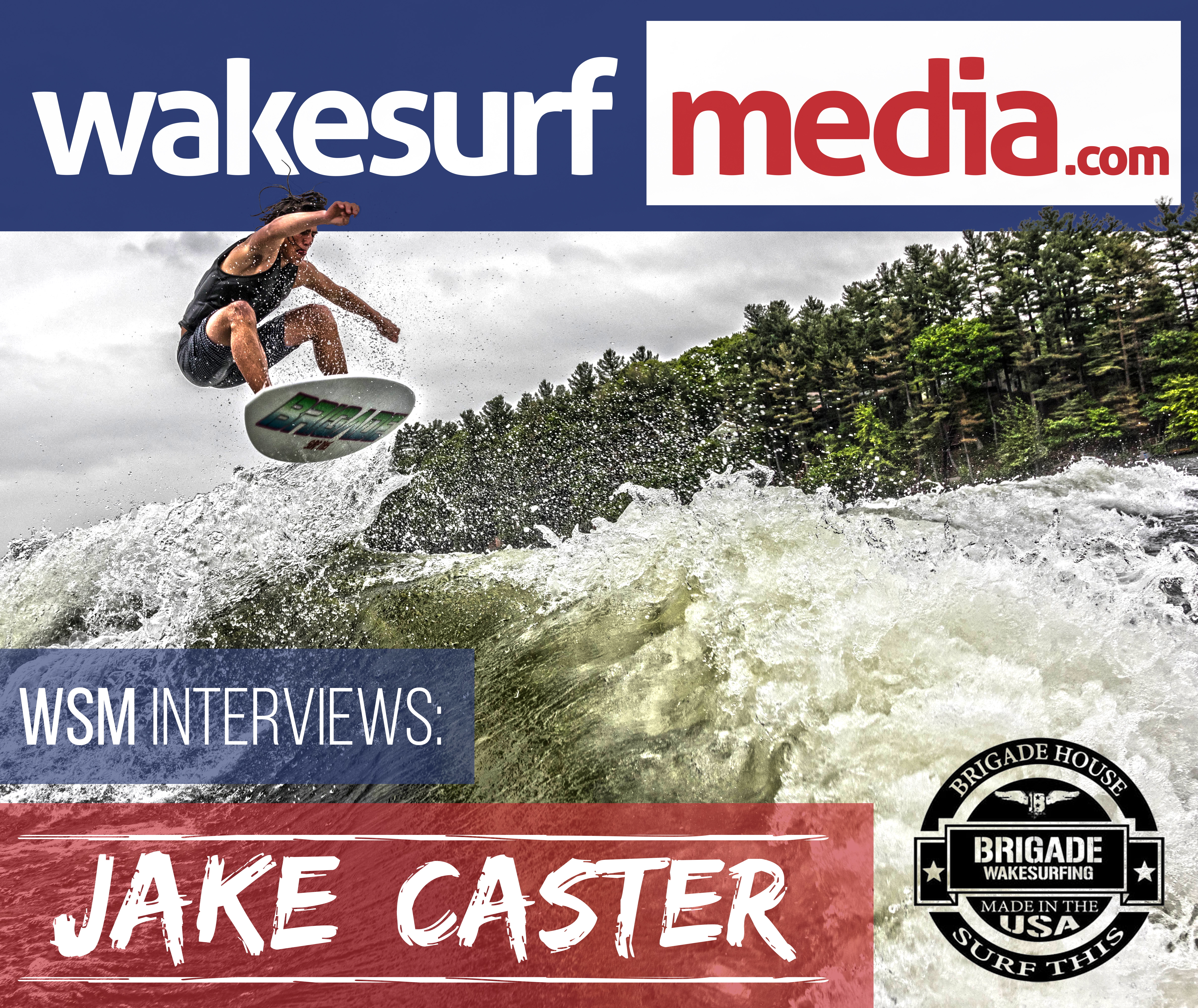 Jake: My name is Jake Caster, I live in Westford, Massachusetts and I have been wakesurfing for almost 4 years now.

Jake: I started wakeboarding when I was young, but after a few heavy falls I started to wakesurf more was hooked!

Jake: My friend Ian Scott introduced the sport to me and I had the time of my life doing it! After that, I started riding a lot more.

Jake: I started competing right after I landed my first shuvits! Brigade then hooked me up with registration at Wake Shredder. I actually placed 2nd in amateur at my first comp!

Jake: I’m not too competitive but I always enjoy winning! I really love to be around people who all share the same love for the sport of wakesurfing. In addition, the competitions are always a blast to attend. It’s been great meeting so many new friends from around the US.

WSM: You recently took home the title of World Champion in the Pro Mens Skim division at the WWSC. The finals were absolutely insane, what was going through your mind after watching everyone else throw down? Did you think you had a shot at the podium?

Jake: I was very anxious to see the results! I really was not sure where I was going to end up because everyone had a banger run! Either way, I would’ve been happy because I was so pumped on how my run went.

WSM: How did you find out you won? Was it when they announced your name or did someone tip you off?

Jake: I was actually not at the event when the results were announced, I was chilling in the hot tub. My Dad called me to tell me! I was so stoked and ecstatic! It took a while to settle in!

WSM: Day one during the semifinals you were put in heat two which was stacked. You ended up having to go into the LCQ by only 1.3 points. Heading into day two what was going through your mind? Were you confident that you were coming out of the LCQ and heading to the finals?

Jake: I was thinking about what I could do to really wow the judges. This is when I decided to throw a […we’re getting to that :)…] I felt pretty confident after landing it!

WSM: Back to that crazy day one, did you know that if you would’ve scored the exact same, but in heat one instead of two, you would’ve not only gone straight through to the finals but also scored the highest?

Jake: I was definitely bummed and a little nervous but looking at it another way, I had another chance to ride and practice for the finals. 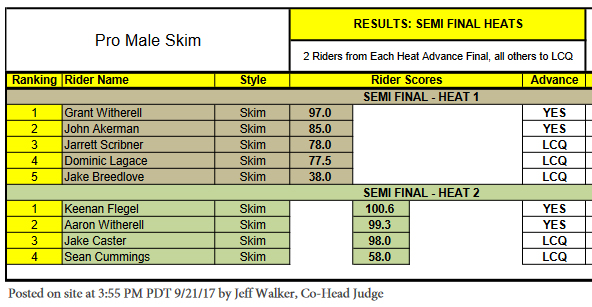 WSM: So the LCQ starts and of course everyone is riding pretty well. You get out there going through your run and then decide to throw something that’s never been landed in competition. Tell the folks at home what the trick was and what its name is.

Jake: The trick was a 360 blind body varial, now known as the Hail Mary! It’s a 360 degree body spin while the board stays put.

Jake: I am pretty used to the colder water living in Massachusetts, so I didn’t have to change anything due to the water temperature.

Jake: My first event was the Wake Shredder Throwdown in Lathrop, CA. I took 2nd place in the men’s pro skim. Then I traveled to Lake Anna and unfortunately didn’t make it to the podium but still had fun. I also squeezed in a local event called Wootown Wakefest in Worcester, MA. It was awesome to get first but also fun judging and training the lower levels. My next CWSA event was Wake The Desert in Texas. I took home 2nd place at that event! Then we took a two-week trip, first to 10k lakes in Minneapolis where I took home 3rd place! Then we headed up to Alberta for the Canadian Wakesurf Nationals where I got 3rd once again! Finally, I went to the US Nationals in GA at Callaway Gardens. Unfortunately, I choked during finals there.  I started school after that and then a month later made it to worlds and came home as a world champion!

Jake: My current board is my pro model by Brigade Wakesurfing.  I also ride finless and my board has very sharp rails and a good amount of nose rocker. I couldn’t be happier with it.  I ride behind an Axis A22 and the killer wave helps me progress so much! I also train pretty hard all winter at an awesome indoor wave facility called Surf’s Up NH here in NH. 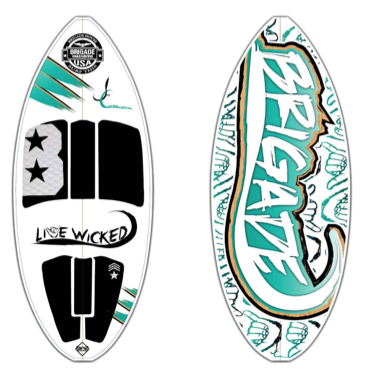 WSM: How long have you been a rider for Brigade and how did your relationship with them begin?

Jake: I have been riding for Brigade for 3 years. It was the first real wakesurf board I used and they were pretty stoked to have a rider here in the Northeast.

WSM: You’re a pretty great surf style rider too. Which is your favorite?

Jake: My first love is definitely skim style but while at comps it’s a blast to ride a bit more and compete in surf style too.

Jake: I head out primarily with either my mom or my dad when I am seriously training.  I have a couple good friends that like to ride as well and I also ride with some other competitive wakesurfers I’ve met at contests. We get to train hard and have a ton of fun too!

WSM:  What was the first CD or MP3 you purchased, and what was your most recent?

Jake: The first song I purchased was a song by Owl City. Most recent purchase was Let Me Down by Trippie Redd.

WSM: We heard you were working on a project behind the scenes called Live Wicked. Can you tell us about it?

Jake: Live-Wicked.com is a brand and website I plan to promote over the winter. It includes all board sports but mainly wakesurfing. Over the past year, I have met so many people that love wakesurfing but many will never compete for a number of reasons.  I wanted to create a website that allowed riders to be part of a wakesurfing community without having to travel to competitions. That way everyone who wants to can still be part of this fast-growing sport. The site will start with wakesurfers submitting videos of different tricks to build a central video library because today it’s hard to find examples of all the wakesurfing tricks that people do. In the future, we’d like to add instructional video’s along with a community chat so everyone can help each other :). Go check out the start of it! live-wicked.com

Jake: I would love to see more people get to share this sport and get as excited about it as I am. More visibility for the public at events would be cool.

Jake: Always stay positive and do not give up what you’re trying to learn.

WSM: We feel like your bag of tricks is sort of overflowing, but is there anything you’re working on?

Jake: I have been working on a 7 shuv and a 540 blind body varial! Sadly the boat just got put away for the season.

Jake: Yes! I would like to thank my parents first because they are so supportive of what I do and all the time they put in for me.

We want to thank Jake for visiting with us at WSM and we look forward to seeing more of him in the future as he continues to progress in his career and push wakesurfing into the future!