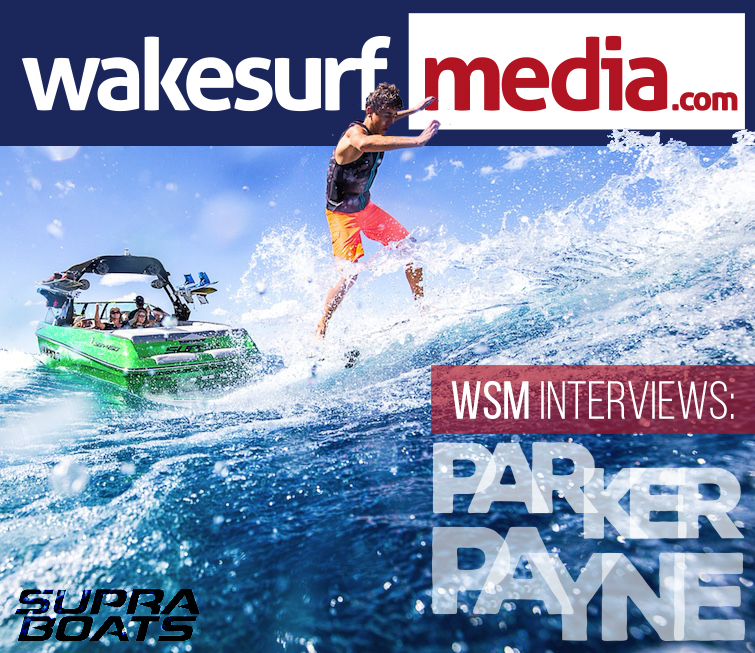 Parker: My name is Parker Payne and I’m from Dallas, Tx. I have been wake surfing for 10 years and competing for 5.

Parker: Growing up my parents always owned a boat, so I wakeboarded, tubed, and did any other possible watersport!

WSM: We’re from Texas as well and do our best to ride year round. Do you do the same? Or do you hang it up during the winter?

Parker: After a long season I like to hang it up to focus on school and relaxing. Training and traveling is amazing but school is my main priority.

WSM: You blew our minds when you landed that 720 bigspin.  What’s your problem and why are you trying to make us all look bad?! Just kidding of course, but seriously… how long have you been trying that trick? The timing has to be just right to land it, we can’t imagine it was easy?

Parker: The 720 big spin is one of my favorite tricks and only a handful of people have ever accomplished it! It didn’t take me very long to land it, after a couple attempts I finally got it. Regardless though, it certainly isn’t easy. The board is hard to track after that many rotations.

WSM: You ride both surf and skim style to an extremely high level, do you have a preference?

Parker: I love to be creative on the skim style board because there are so many more tricks you can do since you’re not restricted by large fins. On the other hand, I love to take what I learned on skim and use it to push the limits of surf style as well.

WSM: How in the world do you jump from no fin on a skim style board to sometimes 5 fins on a surf style board? Does your body adapt quickly or is it just a mental thing?

Parker: It was definitely a mental thing, it took a long time to be able to jump back and forth without messing myself up. On a similar note, it was always easier to go from surf to skim rather than the other way around.

Parker: The classic 360 was the first trick I ever learned. It only took me a few weeks before I eventually got it.

WSM: Back on the crazy tricks topic, how many tries did it take you to land that aquapad boardslide and whose idea was it?

Parker: It was actually my idea! All of my friends thought I was crazy for wanting to do something like that. We did a full afternoon of filming before I finally got it clean.

WSM: Are competitions your thing or do you enjoy freeriding more?

Parker: Free riding will always be my favorite! I’m not a fan of competitions themselves but it is nice to see all of my friends in one place.

WSM: The wave we’ve seen you ride looks awesome, what boat are you riding behind at home?

Parker: Right now I’m rocking a 2017 Supra SA550 and my 2018 is on the way! Hands down one of the best waves out there right now as well as an amazing wakeboard wake!

WSM: How long have you been riding for Supra and how did your sponsorship with them begin?

Parker: My relationship with Supra has been going on for 3 years now. It has been an absolute honor working with them and my fellow teammates! It began after they approached me and asked me to try their boats out. After riding the wave I could never go back to what I was riding before.

Parker: Casey Neistat, he has a business mind similar to mine. I think I would get along well with him!

Parker: Anything really, most of the time my friends play their own music.

Parker: We need more spectators and fans. That would lead to more boat and board sales which is great for the pros and people in the industry.

Parker: Watching videos and learning from others is just as important as actually riding behind the boat.

Parker: Getting pretty good at riding my board upside down! Is that a trick? Haha
[Editor’s note: YES!]

Parker: I would love to thank my parents, I would not be where I am without them!

We want to thank Parker for giving WSM his time and we look forward to seeing more of him as he continues to progress in his career and push wakesurfing into the future!