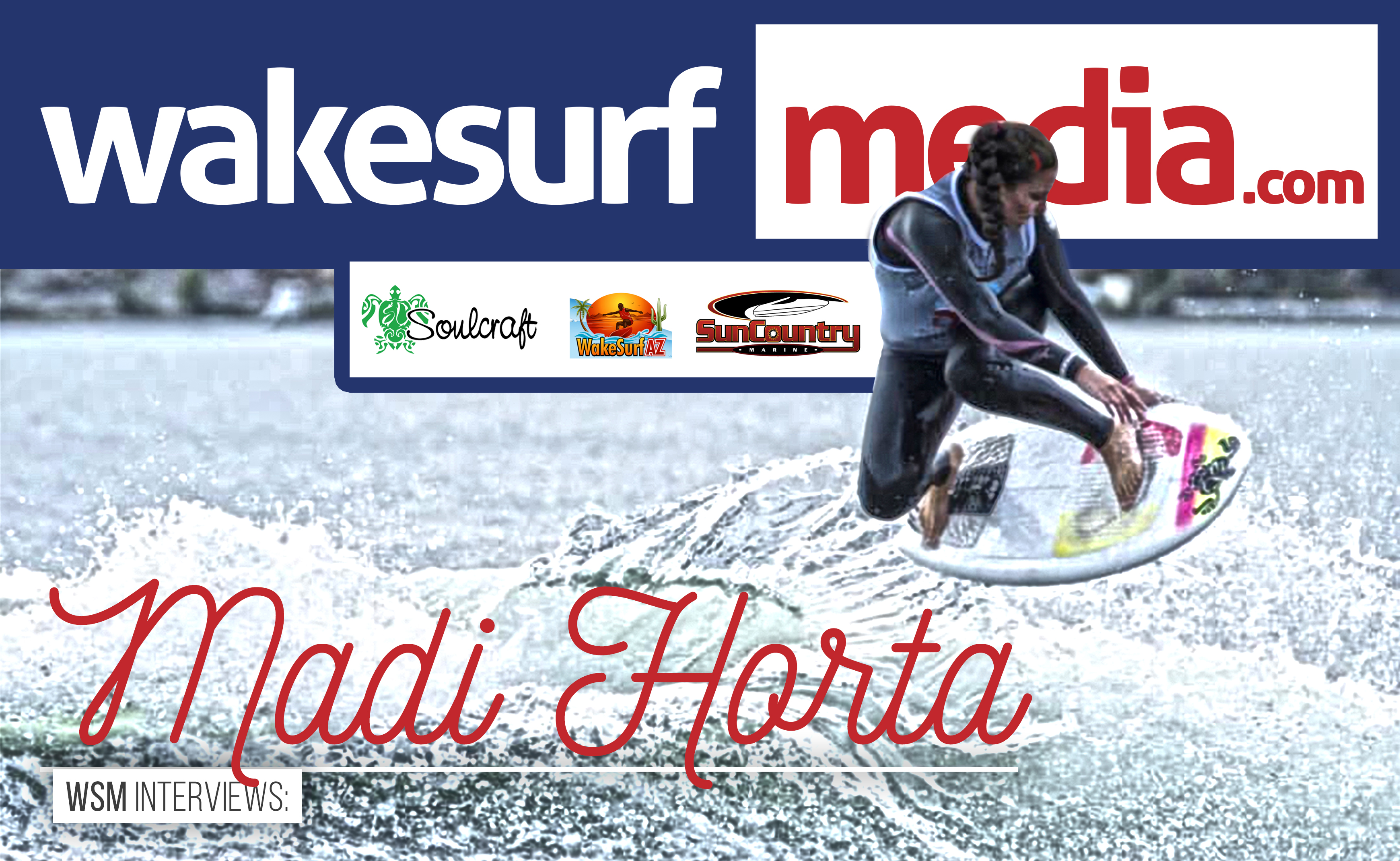 Madi: My name is Madi Horta, I’m from Riverside, California and I’ve been wakesurfing for 4 ½ years.

WSM: Do you recall the first time you experienced wakesurfing? What lake were you on and were you immediately drawn to it?

Madi: My cousin was actually the first person to introduce me to wakesurfing when we were out at our lake house in Lake Havasu. I was immediately hooked and the rest is history!

Madi: As a family, we have been boating forever. I started with kneeboarding as a little girl, then moved to wakeboarding. Once I was introduced to wakesurfing, it became how I wanted to spend my time on the lake. Although, I can’t say no to a tube ride with my niece Tessa. 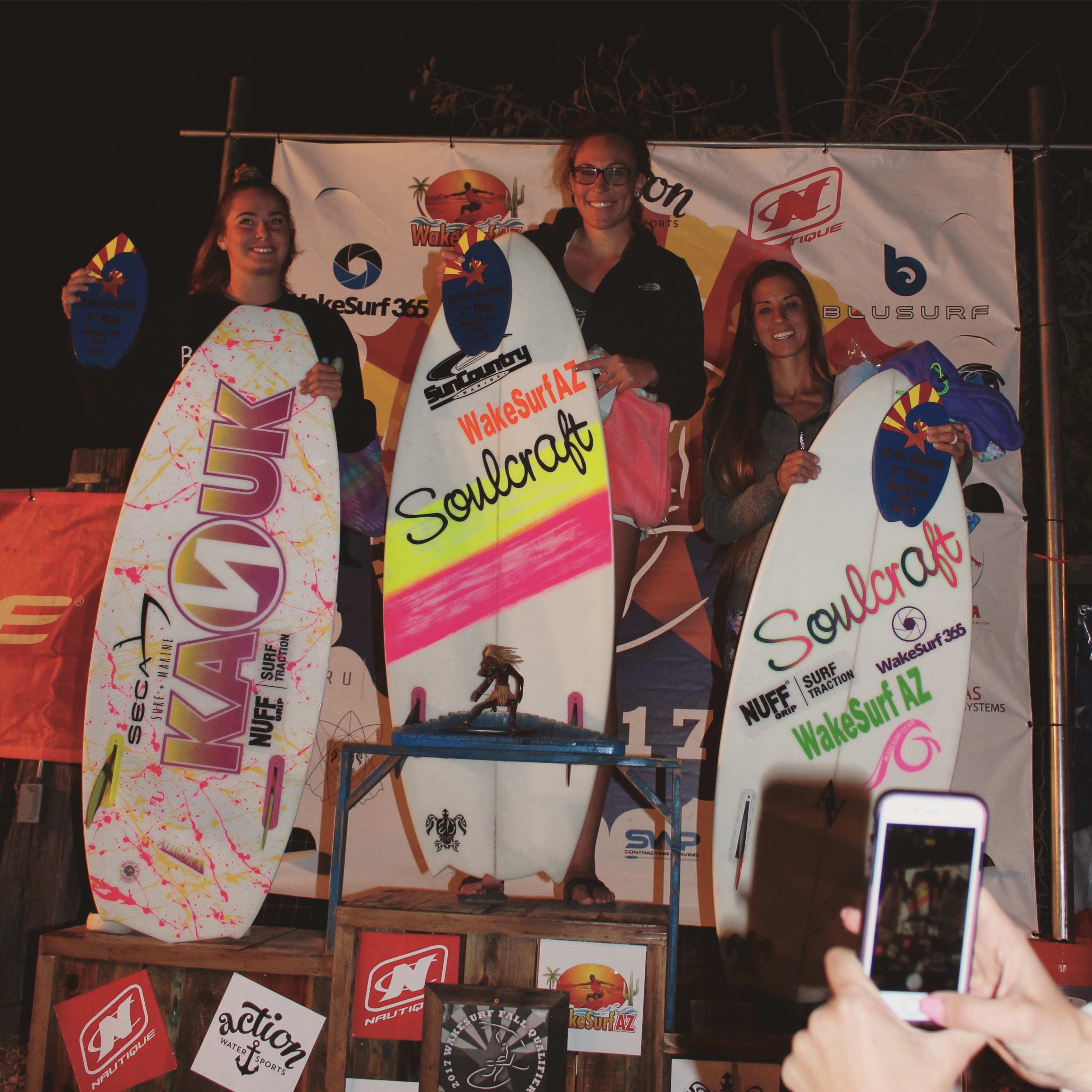 WSM: Take us through your warm up. When you ride for the first time on any given day, what tricks do you throw first?

Madi: My first pull always starts with a bottom turn and a 360. It’s the perfect way to get your feet in the wax. Once I start feeling warmed up, I start running through my trick list.

WSM: You recently competed in the World Wakesurf Championship from Kelowna, BC. Is an event of that magnitude more nerve-racking than a typical competition?

Madi: All competitions are nerve-racking to me. Competing in such a talent-filled division, you always have to be at your best. With that being said, my goal for every competition is to go out and throw a run that I am happy with and come off the water with a smile. In the end, I love to wakesurf and keeping it competitive yet fun, is important.

WSM: In your second run during the finals, you rode switch and did very well. How long have you been riding switch and how long did it take you to get comfortable riding that way?

Madi: I have been basically riding switch since the middle of my first season of competing. I can thank Mike Viland for teaching me and creating my love of switch riding. I became comfortable fairly quickly because Mike would make me ride that way every other pull. 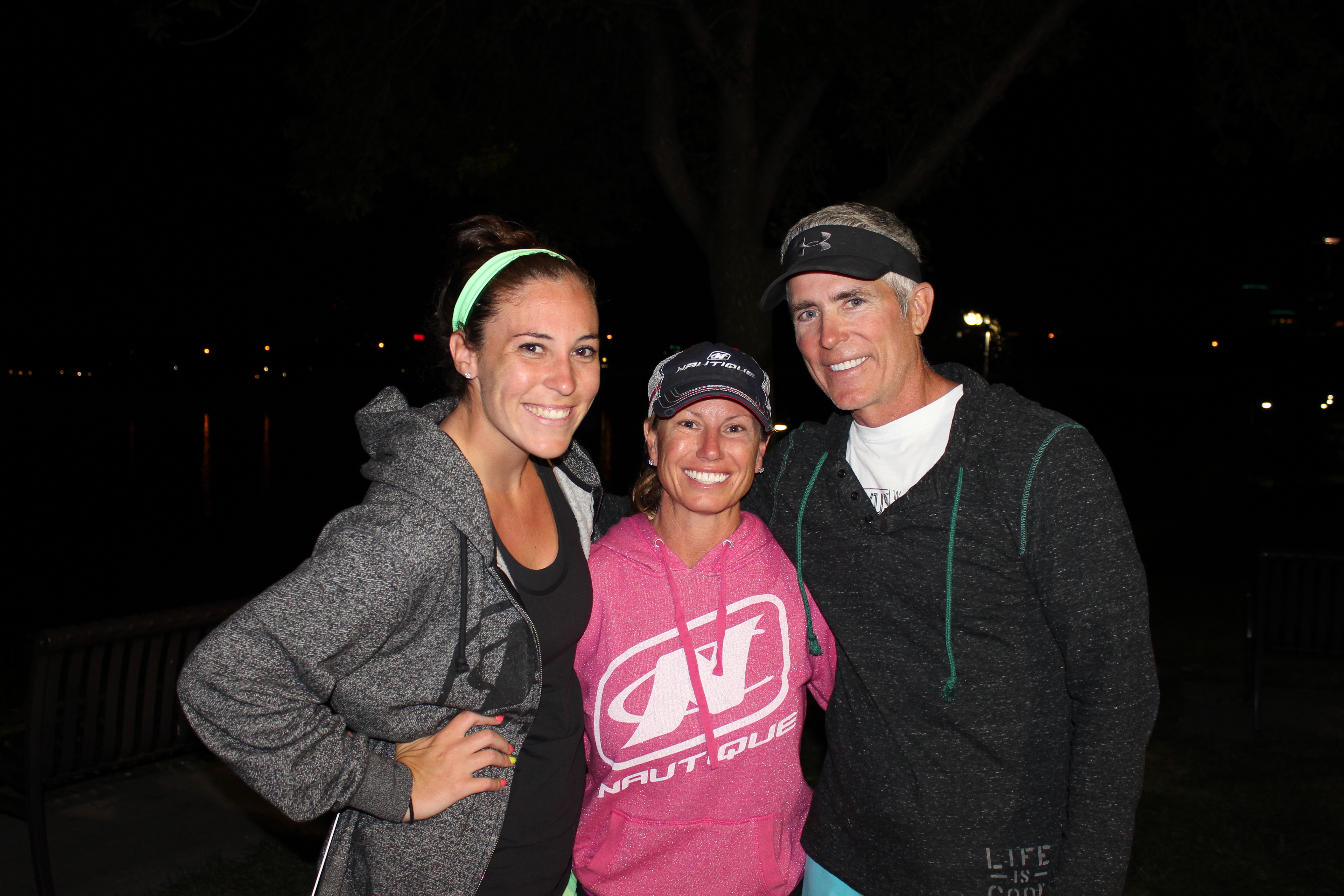 WSM: While riding switch your grabs are full of style, so much so that they resemble a method grab on a wakeboard. Is that something you had to practice much? Or, do your body mechanics sort-of help you naturally get in that position?

Madi: Switch airs with a method grab is one of those tricks that took time to get amplitude on. Once Mike broke down the mechanics to get them to be more “off axis”, it made it a lot easier of a concept to grasp.

WSM: How about the switch alley-oop? That’s a trick not many people are throwing as consistently as you. Is that something you trained for during the offseason?

Madi: Yes, the offseason is definitely the time that I try to learn new things. After I have learned a trick, I try and get it consistent for the next season.

WSM: We imagine wakesurfing has allowed you to travel to some really neat places, can you think of a favorite?

Madi: Wakesurfing has allowed me to travel to some awesome places, but my favorite was probably France. I was invited to go on the trip with Angie and the Burns family. It was such an experience to get to surf in France, we had many laughs, and made lots of memories! 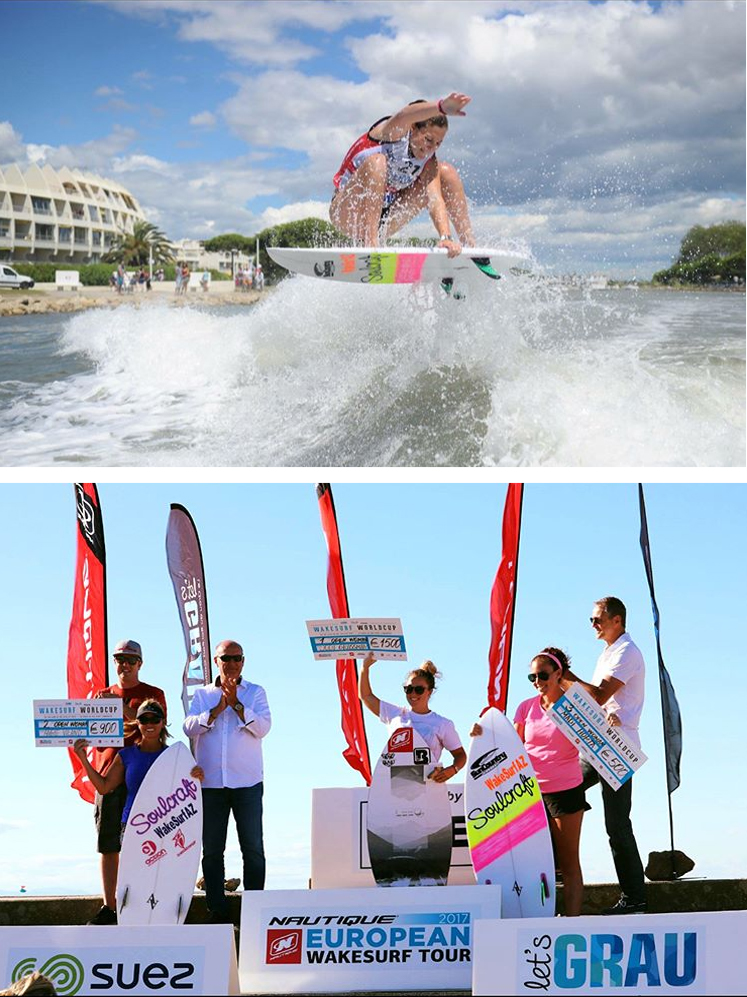 Madi: I am lucky enough to represent some amazing companies! My sponsors include Soulcraft Boarding, WakesurfAZ, and Sun Country Marine. Jeff over at Soulcraft has created boards that have given me the opportunity to progress my style of riding and expand my trick arsenal. Mike and Angie Viland of WakesurfAZ have taught me almost every trick I know and have given me endless support that I am beyond grateful for. Lastly, Sun Country Marine has always ensured my boat is in perfect shape for weekends in Havasu and my demo boat is available for when I need to get some riding time in California as well.
My current setup is a 4’7” Super AV and a Nautique G23. I’m a bit biased but it is my favorite set up. 🙂

WSM: How’d you get hooked up with Jeff and the great folks over at Soulcraft?

Madi: I met Jeff at the Polar Bear back in October of 2013. For Christmas that year, I received a custom yellow and pink Soulcraft and that was when I decided I was going to give competitive wakesurfing a try in 2014. In May of 2014, Jeff asked if I would like to join the Soulcraft team. It was, and still is, such an honor to represent such an amazing company.

Madi: I would say either Scott Eastwood or Liam Hemsworth since they are both easy on the eyes haha.

Madi: I would normally choose something that is upbeat. I will pretty much listen to anything from pop, hip hop, and punk. I recently have been surfing to 80’s rock since I surf with Angie a lot and she is educating on 80’s music.

Madi: I would love to see wakesurfing continue to grow in every aspect. It is great to see more events popping up, new riders at every competition, and seeing current competitors creating new tricks.

Madi: If I could give a newcomer any advice, I would say take video of yourself while in the process of learning new tricks. It is a great tool to see where tricks are going “wrong”, and when they are going “right.”

Madi: I am currently working on some new combos and other little things, but the trick I am hoping to learn next is a switch air reverse.

Madi: Of course! I would not be able to do the sport I am so passionate about with the support of my parents. They have given me endless opportunities to excel in wakesurfing with both their financial and emotional support. My mom is my cheerleader, videographer, and biggest fan. My papa gives the best “pre run” jetski pep talks, but hearing him cheer me along from the jet ski during my runs is my favorite. He knows how to calm my nerves and shows his support in the best ways. The countless hours on the lake and all the travel time we have shared has allowed me to create memories with my parents that I am forever grateful for. A huge thank you to Angie and Mike who have supported me both in and out of the water. Aside from teaching me every trick I know, they have impacted my life more than just my surfing career. Their support is so special to me and I cannot put into words what they mean to me. Lastly, endless thanks to Jeff from Soulcraft for ensuring the highest quality of boards under my feet and Mike Basso from Sun Country Marine for the opportunity to work with such an amazing company. 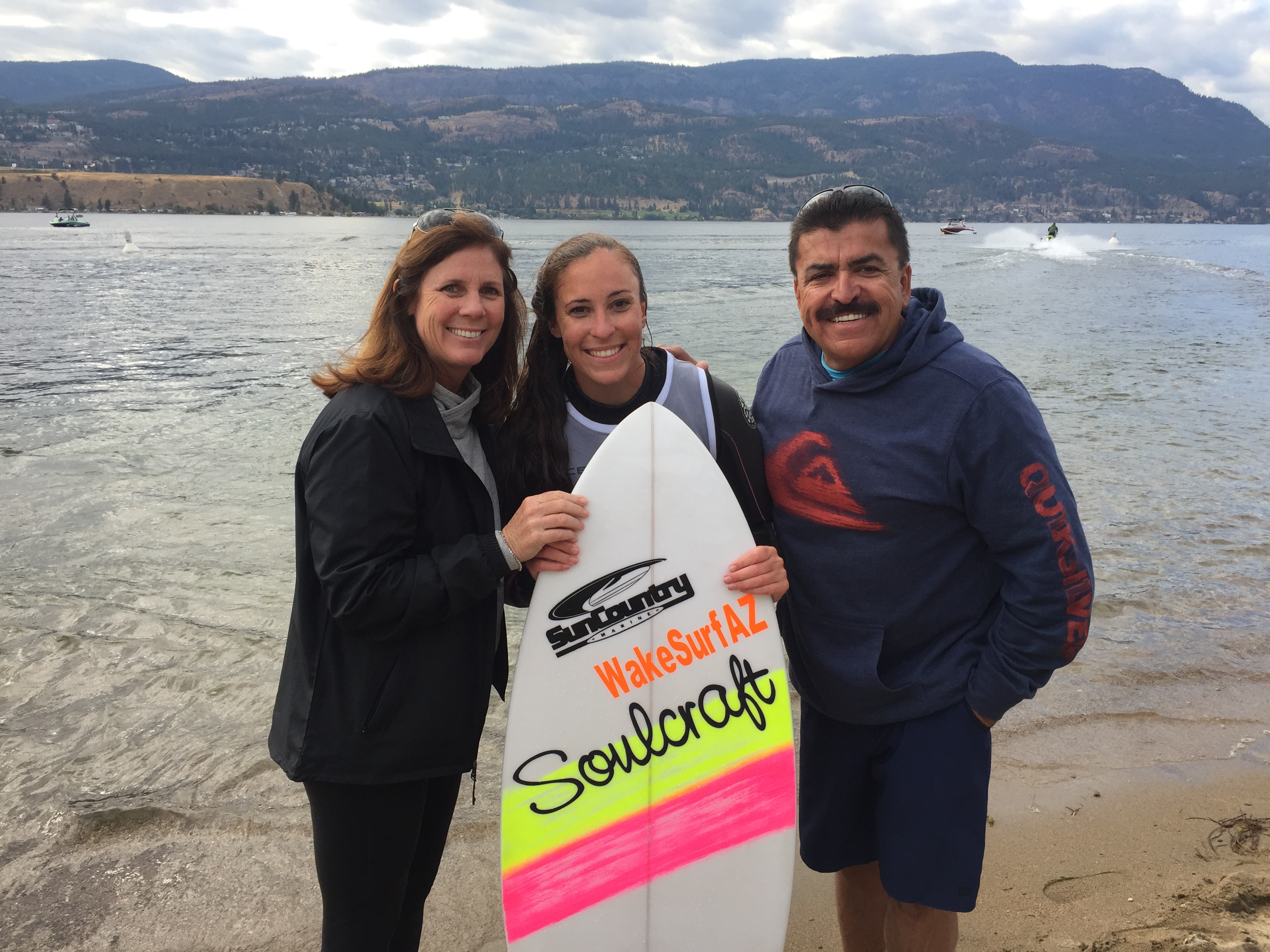