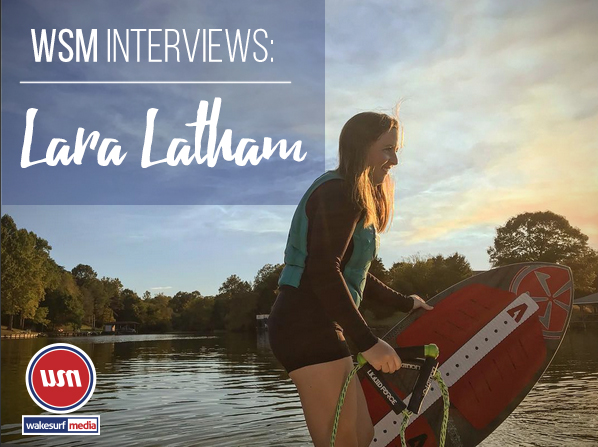 WSM: Let’s start with a typical interview question. What’s your name, where are you from, and how long have you been wakesurfing?

Lara: Before I ever saw a wakesurf board, I was wakeboarding, but wasn’t progressing very much.

WSM: You recently placed 2nd in the outlaw female skim division in the World Wakesurf Championships from Kelowna, B.C. How much fun was that experience and were you nervous going into the finals?

Lara: Going to Kelowna for Worlds was amazing! It’s such a beautiful place to see. I was definitely nervous going into finals, as I am for almost every competition!

WSM: Are you used to riding in temperatures that cold? We heard some competitors drove through snow on their way out of the states. Did you experience any of that?

Lara: The air was pretty chilly, but not bad. The water was in the 60’s I would guess, which is pretty cold. I think the chill of the water mixed with nerves made it seem colder than it was! But we’re used to riding in that degree of water whenever the seasons change to colder in Virginia.
[Editor’s note… 60 degree water is definitely cold in our book!]

WSM: To compete in the worlds you have to have already competed in another event in the same season, which events did you compete in and how did you do?

WSM: Do you have any rituals you do before you compete? Are you isolated and getting pumped up? Or, are you open and relaxed?

Lara: I usually hang out around friends and family before I compete. I don’t like to be isolated because I get in my head too much. I also try to calm myself down before competing so that I’m not overly jittery. I stretch a little to make sure I’m warmed up and loose enough to ride.

WSM: We saw you recently landed your first regular back shuv, how long have you been trying to land that trick?

Lara: I landed a revert 180 shuv a year ago, which prompted me to want to learn a regular 180 shuv. I haven’t been as diligent about trying it as other tricks because it has never felt like I was close to getting it! I would guess I’ve probably tried it about 20 or so times over the course of this past year.

Lara: Every year seems to be a little different, but the staple is me, my husband, and my father-in-law, who owns the boat. My father-in-law loves to be the driver, and my husband is great at giving me analytical feedback, cheering me on, and loves to record my surfing. Usually the fewer people there are on the boat, the more likely I am to try new tricks since I feel like I have more time!

Lara: I want to say it was Hanson! I bought that when I was probably 11 or so, and it was wonderful!

Lara: I like upbeat electronic or hip hop to keep my pumped up and prevent me from surfing too slowly with the beat!

Lara: I would say go to Instagram and YouTube to try to find videos of tricks that look fun to you to try. The best way I learned of new tricks was by competing. I rode for a few years before competing, only ever knowing about a fire hydrant and a 360! Once I did my first competition, I quickly learned of easier tricks I could be trying and went from there. At a lot of competitions there is live streaming from the boat to shore, so you can record what people are doing and then watch it later to learn. Also when you go to events like competitions where you have so many riders who love the sport, you can ask for help from several people and opinions on how to accomplish your trick.

Lara: I’m currently trying to learn a backside big spin, a 360 shuv, a front shuv, and a shuv grab. I have a list of tricks that I’d love to learn, but those are top of mind! I’m also always working on making the tricks I’ve already learned consistent, or tweaking them in some way to look more stylish or clean.

Lara: I’m really thankful for the constant love and support my family has given me throughout the years! Without them, I never would have competed. I also want to thank Phase 5, Agenda Surf, Blueswipe, and Complete Automotive of Richmond for their support!

We want to thank Lara for being WSM’s first interview and we look forward to seeing more of her in the future as she continues to land new tricks and push wakesurfing into the future!