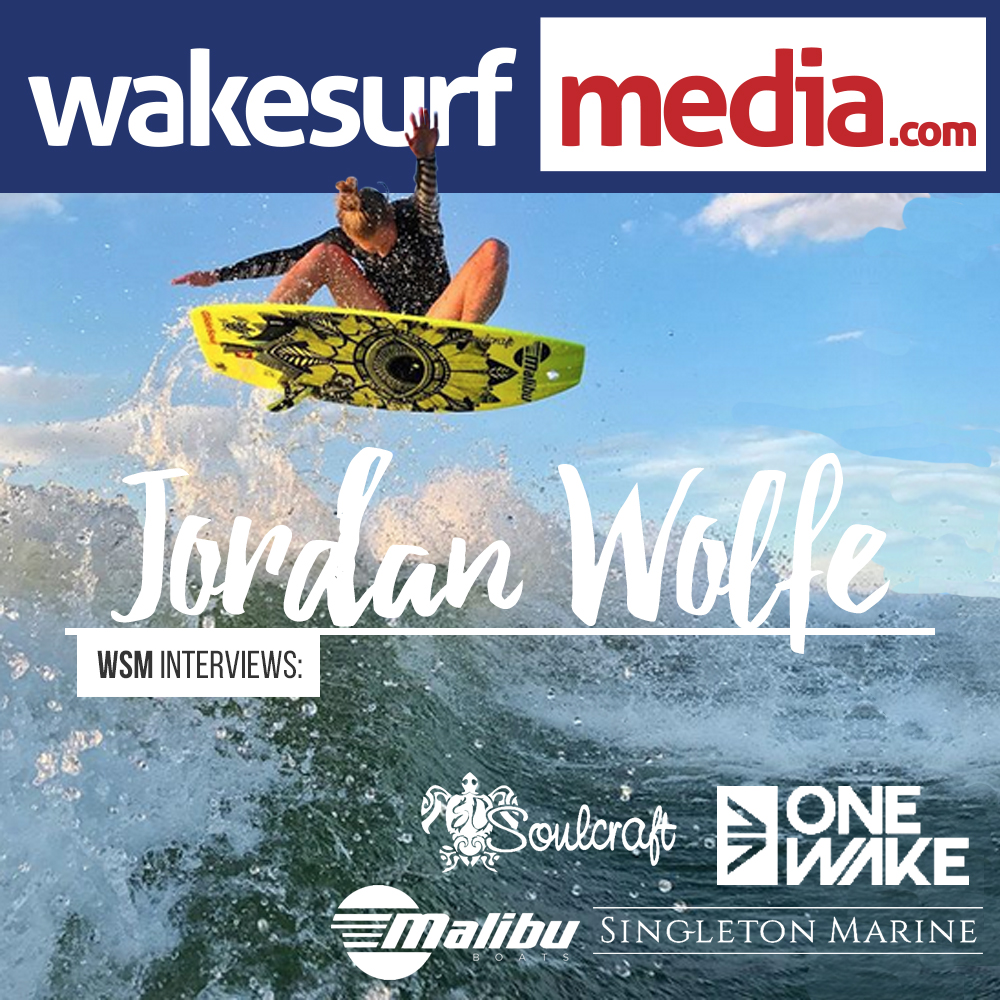 Jordan: Hi, my name is Jordan Wolfe, I am sixteen years old, from Atlanta, Georgia and I have been surfing for six years.

Jordan: My family purchased a weekend home on Lake Sinclair when I was four years old which has given me the opportunity to try just about every towed watersport there is. When I was little, I spent most of my time tubing. As I got older I started water skiing, slalom skiing, knee boarding, and wakeboarding. When I was 10 I was introduced to wakesurfing and never looked back.

WSM: Tell us about the first time you experienced wakesurfing. Were you immediately hooked or did that come with time?

Jordan: The story of how I was introduced to surfing is quite interesting. My dad met some families on an online boat owners forum from Florida who owned the same brand of boat as us and he invited them to come up to our house. While tubing and wakeboarding they stopped us and said we had to try this new thing called wakesurfing. It defiantly took me a couple tries to get up but once I figured out how to control the board I was in love.

Jordan: I think the first “junior trick” I learned was a sitting duck. I’ve always ridden surf style so an ollie in the flats was my first real trick. It didn’t seem to take me very long to figure out the trick. My background in gymnastics helped me with the balance and body control used in wakesurfing and allowed me to pick up things quickly.

Jordan: My favorite trick has be to be an alleyoop.

Jordan: My warm up consists of slicking my hair back, a quick stretch, and then I like to bust out a comp run. After a few carves and airs to get my legs warm I like to go right at it and throw all my tricks. I’ve noticed it helps a ton with my consistency and makes me more comfortable with the cold turkey run you get in a competition.

WSM: We have to ask about your sister, Taylor. Who’s older, who started surfing first, and who has the bigger bag of tricks?

Jordan: Taylor is about 2 ½ yrs older than I am and I have a younger brother, Jackson, who also likes to surf. Taylor & I started surfing together during that weekend I previously mentioned. We’ve worked together on the tricks we have in our runs but have our own styles.

WSM: Is there a bit of a friendly rivalry between you two? Or do you approach riding together with a relaxed vibe?

Jordan: Both Taylor and I are very competitive and when competing against each other in the same division there was some rivalry, but we now embrace our different skills and use them to help each other. Surfing has brought us, and our whole family, closer which I am very grateful for.

WSM: You’re predominantly a surf style rider but do you ever ride skim?

Jordan: The first board I learned on was a hybrid but once I rode on a custom surfboard I was hooked. At the 2012 World Wake Surfing Championships I met Jeff Whalers, creator of Soulcraft boards, and instantly wanted to be a part of his team. Soulcraft has helped me excel throughout the years. While I sometimes fool around on a skim board and may compete in the skim division occasionally, surf style has my heart.

WSM: In 2017 you competed in the World Wakesurf Championship from Kelowna, BC and took home 3rd in Pro Women’s Surf! How much fun was the event? Were you prepared for the cold water?

Jordan: The World Championships in 2017 was amazing! That was only my second time traveling to Canada and I loved both visits. The venue was great and it was loads of fun, even though I was freezing the whole time! I can tell you that the water in Georgia never gets that cold. Even though I had a wetsuit and thought I was prepared, I was caught off guard a little and did struggle some during my runs.

WSM: Going into the event did it cross your mind that you could make the podium?

Jordan: After finishing 2nd in 2015 and 2016, I was gunning for the top spot on the podium in 2017. The competition in the Pro Women’s Surf division is intense with a lot of great riders which keeps me on my toes and helps push my riding to the next level.

WSM: What was it like hearing your name being called? How long did it take to sink in that you just got 3rd place against the best women in the world?

Jordan: After my semifinals run, I was feeling confident as I had one of my best runs ever that day during which I landed a new trick and won my heat. However, finals did not go as planned and while I was proud of my 3rd place podium, it was not where I wanted to finish. I was honored to have made it on to the podium with some extremely talented ladies.

Jordan: My sponsors include Malibu boats, OneWake, Singleton Marine, and Soulcraft Boarding. I would not be where I am without my sponsors and I am so grateful for them all and I strive to represent them in a positive and professional manner no matter where I am, on or off the water. Malibu, OneWake and SMG take care of my Malibu 24MXZ which allows me to train behind a boat with an amazing wave that is super easy to adjust. This gives me a competitive edge, allowing me to be ready for any competition wave. Of course, I think my pro model Soulcraft board, The Jordi Pro, is the best board out there. I ride with a tri fin set up and the wider nose. The channel on my board helps generate speed and gives me a sense of stability while doing revert and spin tricks. The wider tail helps for getting as far back as possible on the wave which allows me to drive forward with the most speed for big airs.

Jordan: I would be ecstatic if I ever got the chance to bring Joey Logano out on the water. Both owing Malibus, we could shred together behind the best boat. I would love to ask about his journey and how he got to where he is today. May even try to talk him into letting me behind the wheel after a game of surf!

Jordan: Usually while I’m in the water, my sister is DJ in the boat so I don’t usually get a choice of music. But if I did, I would go with more electronic/dance music. The fun beats help boost my mood when riding. I’m not too picky, I like anything that keeps me motivated and lets me have fun while training.

Jordan: I would love to see the sport continue to grow and expand. I feel like I see a lot of the same people at every competition, but I think we can work to grow and introduce more people to not only the fun side of wake surfing but also the competitive side of the sport.

WSM: What advice would you give a newcomer to the sport that’s looking to progress and learn new
tricks?

Jordan: For someone new coming onto the scene I would tell them to make sure they have the right board for them, be comfortable on any and every type of wave, and if you have the chance to get behind a different boat – take it. Keep practicing and trying new things. One way I have learned and excelled on my tricks is by videoing and then going back and observing what I’ve done and need to do differently. By examining yourself and breaking down the trick you can figure out how to improve.

Jordan: I’m constantly trying to expand my list of tricks with the big spin and shuv in/shuv out being the two tricks I am hoping to have down for the 2018 season.

Jordan: Thank you to my sponsors, they provide me with everything I need in order to perform at my best. I am grateful for all the friends and contacts I have met through surfing it has defiantly opened some doors I never thought were there. Of course, a huge thanks to my family, they all have sacrificed so much for me and my surfing career. They have helped me with my surfing as well as encouraged and pushed me no mater what. They are my number one supporters and I don’t think I can thank any of them enough for all they have done.