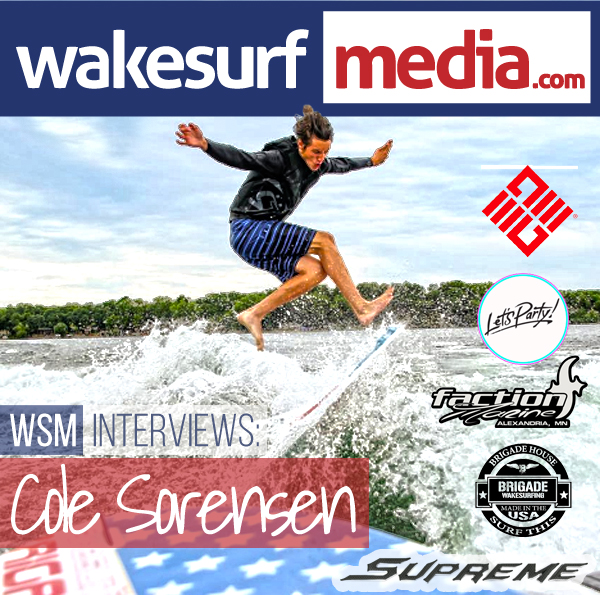 Cole: My full name is Cole Everett Sorensen. I have lived in Alexandria, Minnesota for the majority of my life and love it here but will be moving to Reno, Nevada in November. I believe I have been wakesurfing for 7 full summers, competing for 6 of them. 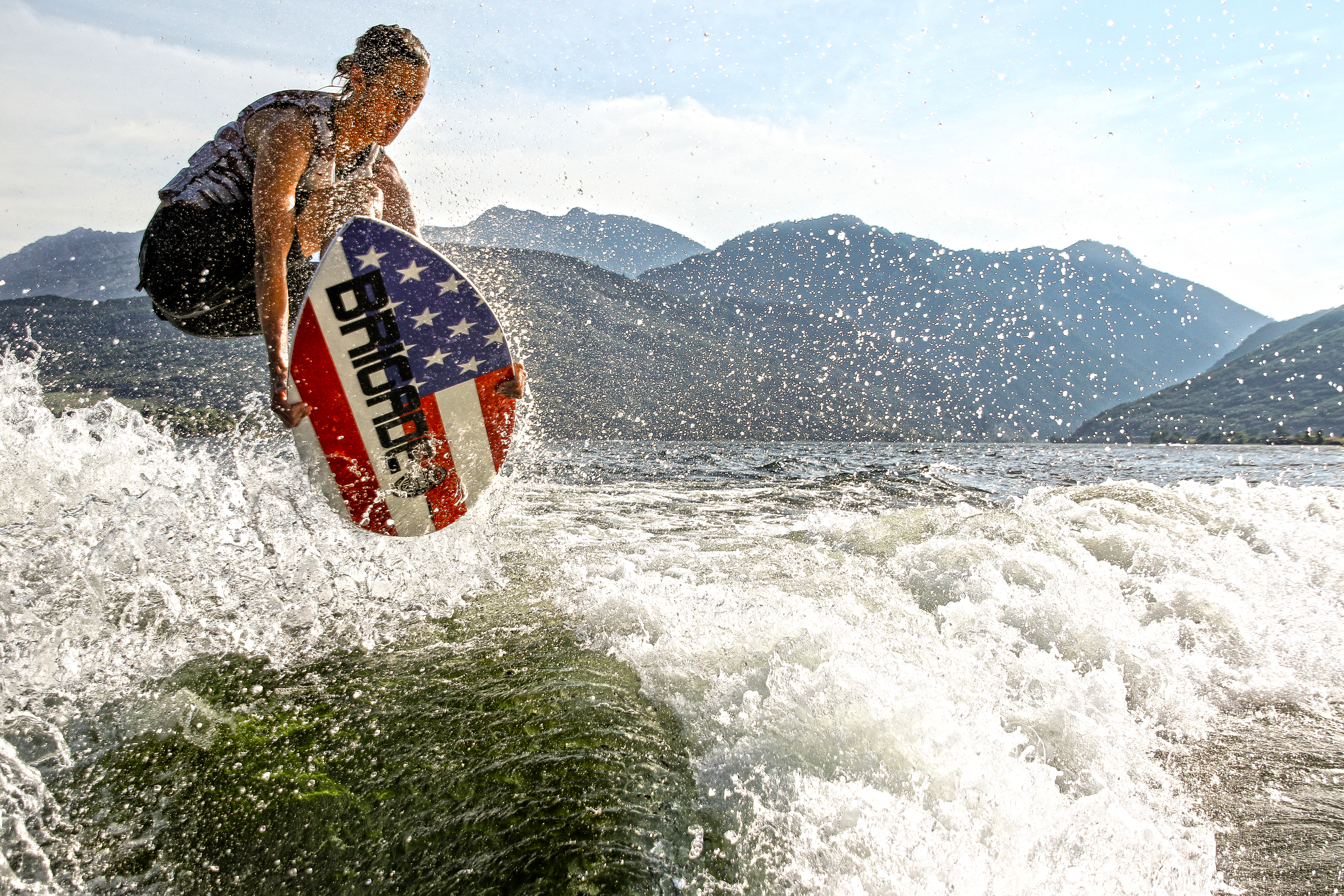 Cole: Before wakesurfing, I was kneeboarding and wakeboarding. We had a pretty nice fishing boat that I used to shred behind but decided to upgrade to an inboard when I started tossing backflips on my wakeboard. I latched on to surfing because it was more casual and felt super natural.

WSM: We’ve seen some footage of you shredding on a snowboard as well. How long have you been snowboarding and how did you get into it?

Cole: I think this coming winter will be my 9th winter on a snowboard. I actually started out skiing but decided snowboarding looked way more fun. Snowboarding seemed like the right thing to do because I was also heavily into skateboarding.  I think I actually like snowboarding more than surfing because it’s more social and there is just so much more to it than wakesurfing. Competitive snowboarding is a huge part of my winter.  I compete most weekends.

WSM: Were you able to watch much of this year’s Worlds? What’d you think of the Pro Mens Skim Division finals? It looked pretty stacked to us!

Cole: I didn’t get a chance to watch the event because the livestream wasn’t really working but I was able to keep in touch with all my friends! I was snapping some of them and they kind of told me what was going on. The pro men’s skim division is always super heavy at worlds! It’s always interesting because you never know who might win! Anybody could have their worst day of riding or have the best run ever. That’s what I love about competing in pro— everyone has a shot at the big prize! 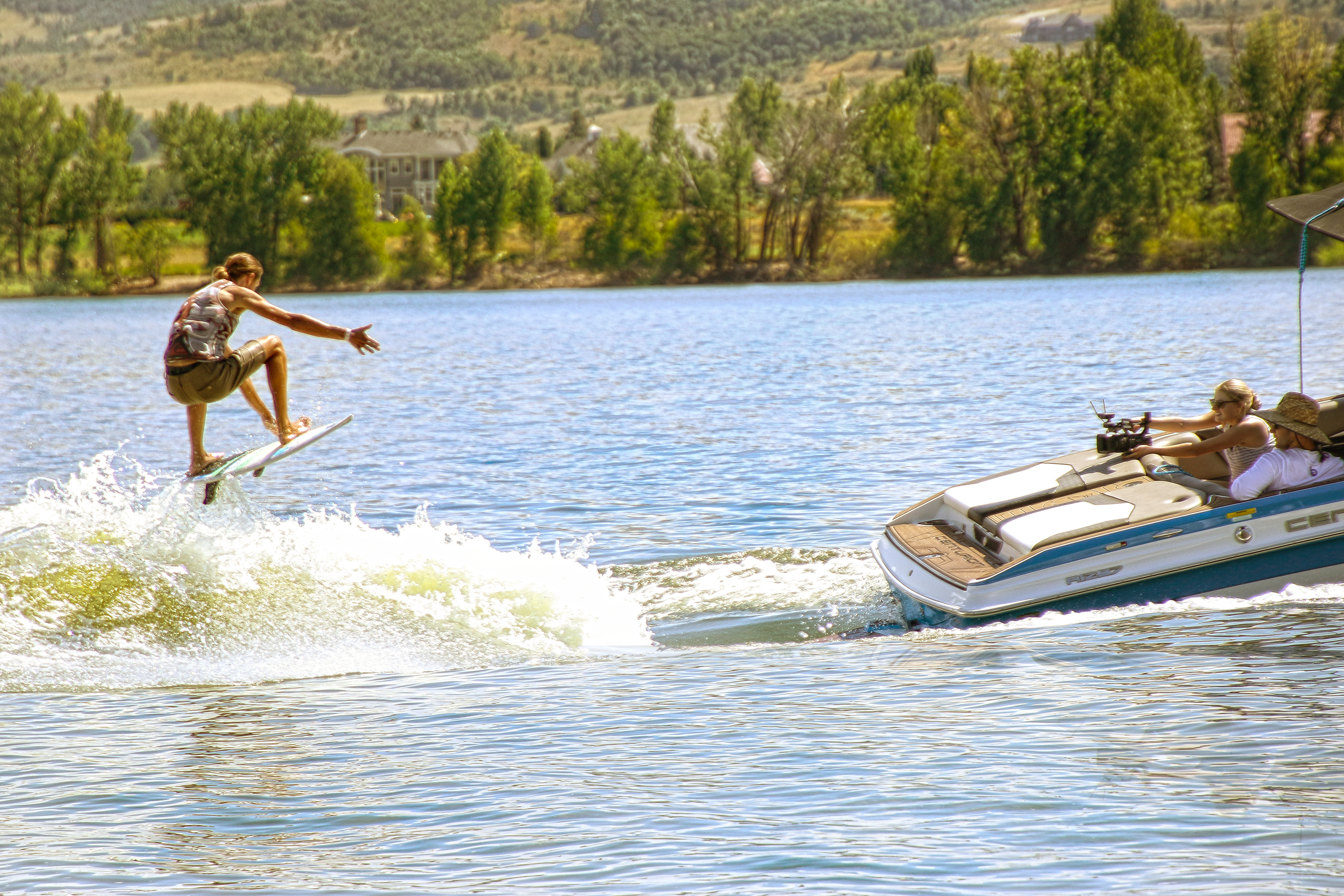 Cole: I will definitely be competing next summer! I never know exactly which competitions I will do, but I hope to make it back to Minnesota to see all my friends! On Labor Day weekend I lacerated my kidney and spleen because I got hit with a bungee. We were doing tow-ins and my friend accidentally let go of the handle when it was fully stretched. The handle hit me in the back while I was driving. I will definitely be ready by then! It’s just more time to think of some new tricks!

Cole: The first trick I ever learned was an ollie in the flats. It was on my first board ever (a Hyperlite Broadcast that was about as tall as me), and I was trying to ollie like I did on my skateboard. The first competition trick I learned was actually a 180 shuv. I learned those before 360’s because I couldn’t spin on the surface with that big board and its fins. With the 180 shuv, I would just start with the board backwards and basically just hippie jump to let the fin catch the wave and spin itself. It also came a little easier to me because of the skateboarding background I had.

WSM: Your dog seems pretty chill, tell us about Crock. How old is he, what kind of dog is he, does he ever surf with you?

Cole: Crock (short for Crocker) is a 7 year old male springer spaniel that loves the water. I think he would be too scared to actually be on the board while surfing, but he loves being in the boat with us.

WSM: At what air and water temperature do you call it quits for the season?

Cole: There is actually an equation for that! If Air temp + Water temp is > 100 degrees, go and shred! I don’t usually ride that late in the season because it just isn’t as fun after it gets that cold! Some people are just crazy about surfing and will ride all the way into October, but we just aren’t those people. The ice usually goes off the lake mid to late April which is good because I usually have the AZ Wakesurf Open mid-May to get ready for. 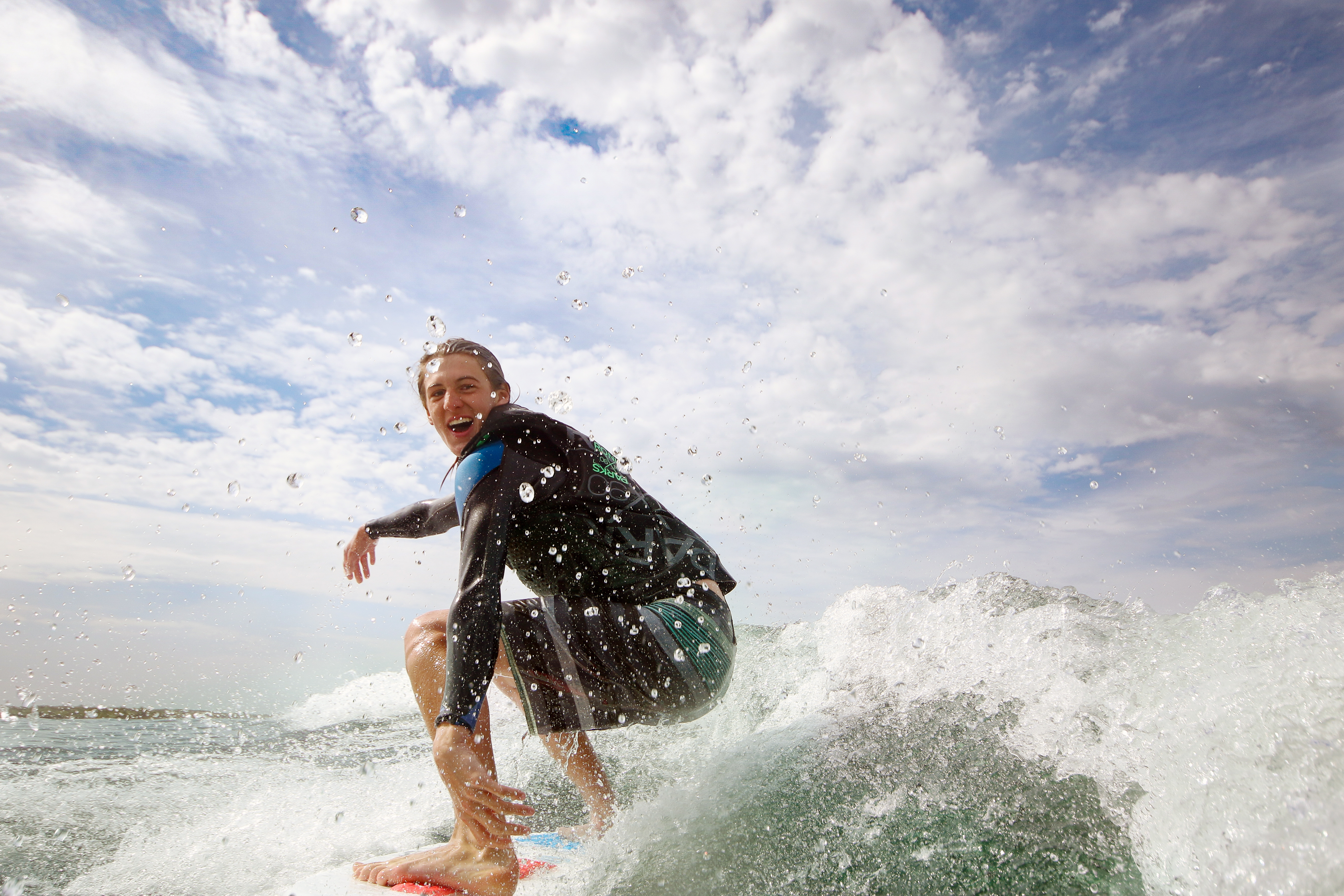 WSM: How long have you been riding for Brigade and how did your sponsorship with them begin?

Cole: I have been riding for Brigade for about 4 years now. I started out as a rep and have worked my way up to being a team rider. Brigade is awesome because the team is pretty close-knit and I have a great relationship with the Owner, Shawn Wright. Shawn has always been there for me, promoting me, and helping me be who I am today! He always is within an easy reach and only a text away.  I have gotten offers from other brands but have stuck with Brigade all the way!

Cole: I think I would resurrect Kurt Cobain so we could head-bang while shredding. I think it would be interesting to talk to him.

Cole: Of course I like grunge music, but I think for wake surfing I would pick some smooth jazz.  You can totally flow to the beat!

Cole: I would like to see it less focused on social media. I feel like we rely too much on it and it starts to become a measure of self-worth. I love seeing what’s going on and watching cool edits (mostly memes lol) but sometimes it turns into more than that. It’s hard to have a fun and interesting Instagram page when companies need you to rep their product. I totally understand it, but I don’t want my page to turn into a billboard, and sometimes it’s a struggle.  Another thing I don’t like is that sometimes wakesurfing feels like it turns into a team sport.  People get caught up in brand names and stuff but you have to think about why you love the sport and that you have to ride for yourself.

One direction I would like to see wakesurf competitions go is to have more ride time.  You may fly across the country for only one run – it can be really expensive.  10K Lakes Open does a really cool event the night before their comp which is a pro event sponsored by Liquid Force.  It’s all the pros in the boat and we have a great time.  Those are the little things that make going to a competition worth it.

Cole: The biggest thing that helped me learn tricks was doing them on my skateboard. If I could land it on my skateboard, I could definitely do it on my wakesurfer. There are tons of videos and information out there, but studying how to do the tricks is only part of it. I progressed quickly because I was always trying new tricks, even if they were “out of my league”.  Get out there and try it!
[Editor’s note: 100% agreed! Definitely do your research, but practice is also a huge part of the equation!] 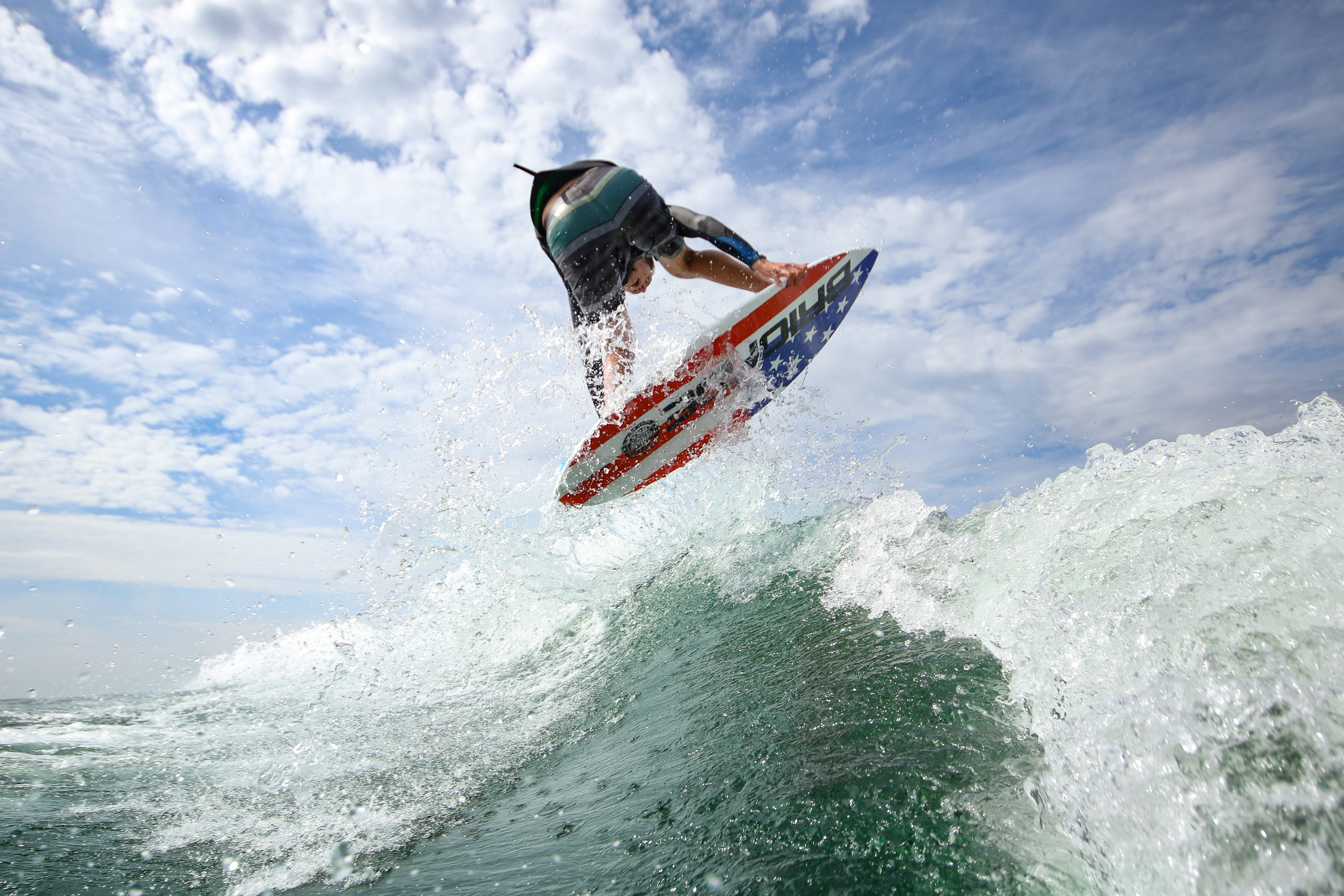 Cole: Late this summer, I learned a switch 540 big spin! I’m pretty proud of that trick! The hardest part for me is just figuring out where tricks can fit into my competition run and planning my weak spots and possible falls. I just got some new editing software so expect some more filming and quality edits!!

Cole: I’d like to thank Brigade Wakesurfing, Supreme Boats, Faction Marine, Let’s Party Traction, and EdgeTv for all helping me out this season. I would also like to shout out my parents for being so supportive of me and making sacrifices just to help me get further in my sports. My mom helps so much with my social media and I definitely wouldn’t be in this position without these people! I am so grateful!

WSM: Where can the fans go to catch up with you? 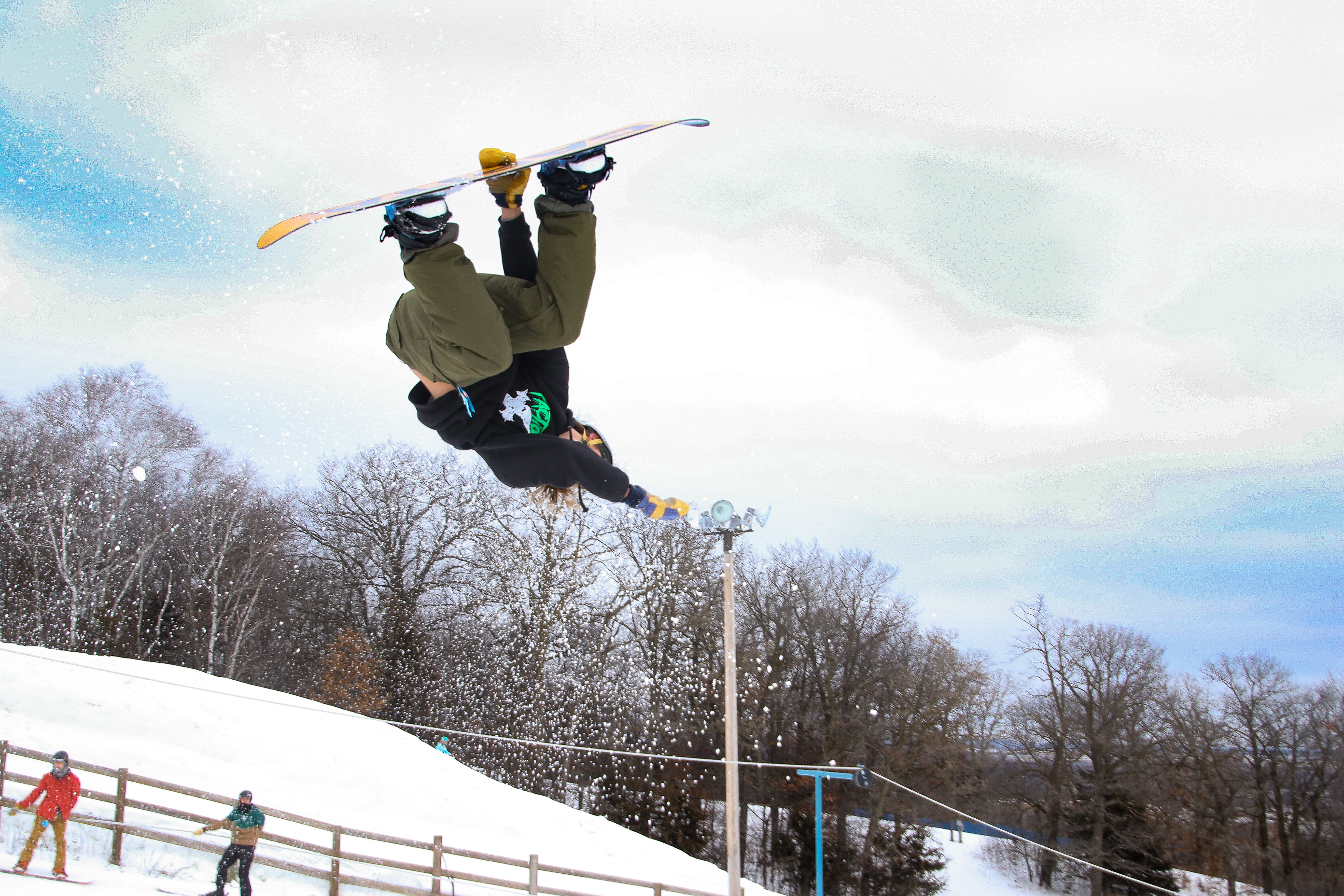 We cannot thank Cole enough for giving WSM his time and we look forward to seeing more of him as he bounces back from injury and continues to progress in his career and push wakesurfing into the future!