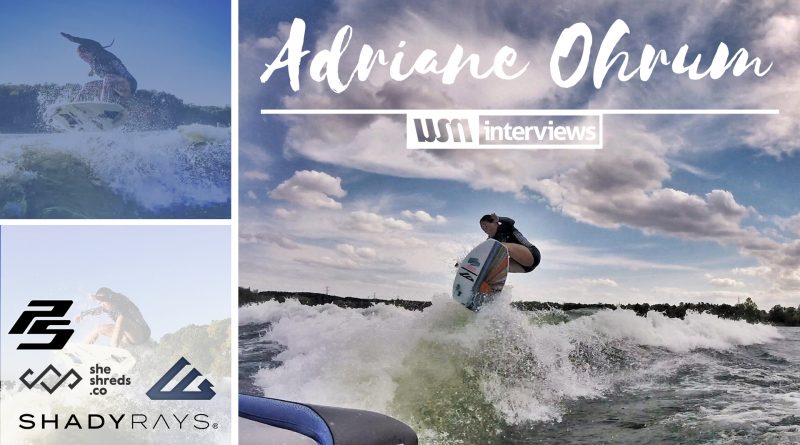 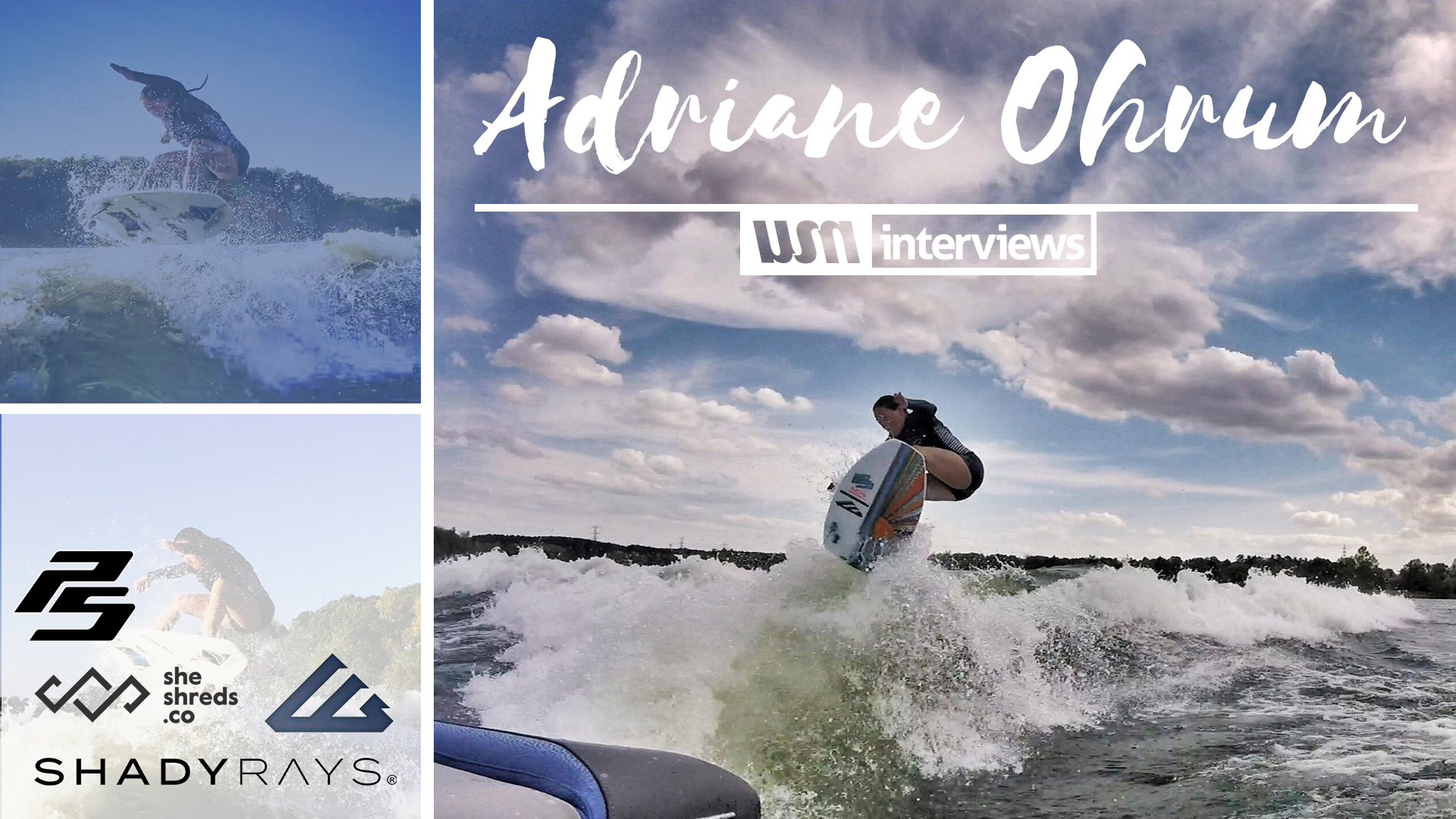 Adriane: Adriane Ohrum. I live in a small town in south central PA called East Berlin, which is between Gettysburg and Harrisburg, but I am originally from Wallingford, PA. I started wakesurfing in 2008 as “something to do” between wakeboard sets, and started taking wakesurfing more seriously about 4 years ago.

WSM: Prior to wakesurfing, how was wakeboarding?

Adriane: I was never that good at it. I have always had bad knees, and wakeboarding made them worse.
[editor’s note: preach it, sister!]

WSM: Do you remember the first time you experienced wakesurfing? Where were you at and were immediately hooked or did that come with time?

Adriane: Yes! I had actually blown my right ACL about 2 days prior while we were on a week-long boating vacation at Lake Anna, VA. I couldn’t wakeboard, but I was encouraged to try surfing. The first time I tried, I was on the goofy side. I had no idea I was a regular rider! But I was hooked!

WSM: What was the first trick you landed and how long did it take you to get it?

Adriane: Oh man, do I have to answer this? LOL. I guess my first trick that I didn’t realize was a trick was a lip snap – still one of my favorites, but it was just an instinctive trick for me. That pesky and elusive 360 was the one I tried to land FOREVER – for two seasons actually. But once I figured it out I was spinning like a top.

WSM: What style of riding do you prefer? Are you more of a laidback cruiser? Or do you try to send it every time you pump?

Adriane: Ha ha, there is nothing leisurely or chill about my riding. I call myself the “20 Second Girl” because I am always going for a trick and so I fall a lot because I tend to ride aggressively. Even when I am in the flow and having a nice long run, I am slashing, snapping and carving hard.

WSM: We saw a photo of you and Evan Feierabend showing off a little artwork you added to his board. How’d that come to be? Have you designed any artwork for other boars?

Adriane: Awww Yay! I was honored that Evan asked me to design something on his board. I have been painting my own surfboards ever since I became sponsored by Parker Surfcraft. Chris’ boards are all blank except for his logo and stringers, and I just couldn’t help but look at it as a canvas. People had really taken notice to my board art the last couple years, and the art on my current board has especially gotten some attention. I love surfing with Evan and he has really helped me a lot with my riding. He loved the art on my board so when he asked me to do his, I of course said yes. I admit I was a little nervous though – I had really never done anyone else’s board before! I also designed Christtany Harler’s Parker Surfcraft at the same time I did Evan’s. They are the only two lucky ones to have my originals on their boards other than me. 😉

WSM: What’s your equipment setup for the 2018 season? Have you had much riding time yet?

Adriane: I ride a Custom Parker Surfcraft 4.2 Phantom with AU 24K Thrusters. This year hasn’t been the greatest for weather or conditions; our season had a late start due to an unusually cold April, and we have had so much rain that at times boats couldn’t even be put in the water due to debris and high water. But I have done a fair amount of travel to surf with Evan Feierabend, Lara & Andy Latham and Kyle Austin, so that has been a big plus.

Adriane: I’d just really like to see less restrictions on wakesurfing. Where I live, it isn’t as common as other areas, and therefore the restrictions some lakes and communities put on wakesurfing are created by people who don’t fully understand what it is. This is a family sport and a sport that so many people can do regardless of age and ability. So, I’d really like to see more availability for new people to be introduced to wakesurfing where I live, and we’re a bit behind in that regard. We need more demo events and grassroots competitions up here so that more people become involved.

Adriane: Well, I am having an interesting season compared to past seasons. The last couple of years I really had my tricks dialed, but this year I am working on some new styles of my old tricks so that I can graduate to some more difficult tricks. So, I am actually working on my 360 again because I’m doing it so differently than I used to. I’m focusing a lot on muscle memory as I re-learn old tricks. And when I get that dialed in, my hope is to have a flawless body varial and a 720 down by season’s end.

Adriane: My riding wouldn’t be what it is without the thing I ride on! So a big Thank You goes first to Chris Muehl, owner of Parker Surfcraft. He has supported me since I began competing 3 years ago and he simply makes an amazing board. BIG shout-out to Sheshreds.co – as a Silver Ambassador, I have been connected with a worldwide community of female athletes who are all involved in extreme sports. They do a lot to promote their ambassadors through social media and I am grateful to them for the exposure they have given to me and my wakesurfing. I am also sponsored by Shady Rays Sunglasses as an Elite Team Member. They make AWESOME sunglasses and with every purchase, they feed 11 people in the US through Feeding America. And I am the Pennsylvania Community Leader for Land Locked Surfing which is a fantastic organization that promotes non-ocean surfing of all kinds throughout the US, directing people who are interested in learning about surfing to knowledgeable individuals who can offer connections and resources to get them started. I would otherwise like to thank some people who have really helped me through my surfing journey, both on and off the water: To some really awesome friends who never deny me when I ask to come out to surf their boats: Nick Geesey and Jason Stutzman; To my SheShreds Big Sis and Parker Surfcraft teammate Colleen Cain for her emotional support as I have learned the ropes of competing; To 3 UH-Mazing surfers that have been pivotal in my progression this year alone: Evan Feierabend, Lara & Andy Latham; and to my best friend, Roy, who supports me through everything, on and off the water and even takes me out on his boat when he can! 😉

Adriane: Well, as a Social media Consultant by trade, that would be appropriate! LOL