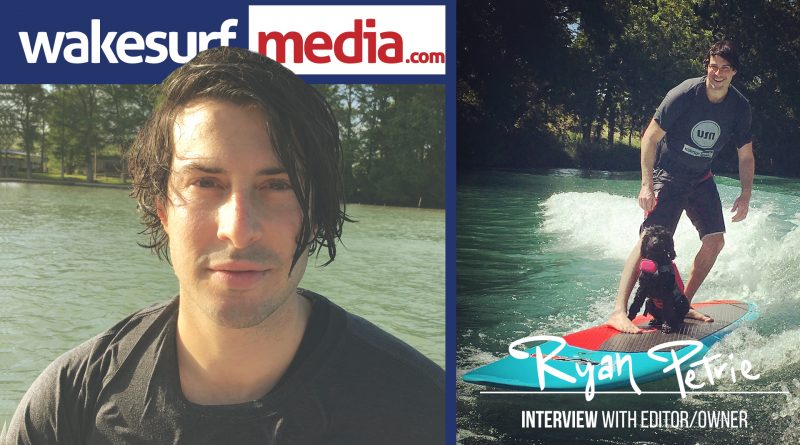 As our website and social media have grown over the past few months we’ve been getting contacted by industry folks and enthusiasts alike. Through our discussions with them, we’ve done our best to compile the questions that we hear the most. So, rather than hold onto this info just for ourselves, we decided to cover the topics in the form of an interview. Consider this a Wakesurf Media “FAQ” article. We’d love to do this again, so feel free to send any questions over to wakesurfmedia@gmail.com

Q: Who’s running this stuff behind the scenes?

A: Ryan and Chrissie Petrie. Hubby and wife, beast and beauty, dummy and Dr.

Q: What made you start WSM?

A: Ry has a degree in graphic design and a passion for wakesurfing, so something like this had always been on our mind. One night we were all hanging out around a bonfire at a buddy’s house who had just gotten into wakesurfing. He asked if there was somewhere he could go to see solely wakesurfing content online when he was on a break at work. Ry cited a bunch of different places he could go but they then both realized there really wasn’t a central hub. More or less, it was either scattered around social media and the internet or mixed in on other websites that covered way more than just wakesurfing. So, with a little time and patience, wakesurfmedia.com and the attached social media accounts were born!

A: Good question! We played around with a few ideas at first but none of them seemed to land. Wakesurf Magazine was one, but we weren’t a physical magazine so we didn’t want to confuse anyone [plus that is already taken I think?]. Wakesports Media was another, but since we only wanted to cover wakesurfing we felt like it wouldn’t fit either. That’s all the other ones we can think of off the top of our head, but we’ll update this is we come across any others we discussed!

Q: Your logo has the letters WSM yet the name of the site only has two words – Wakesurf Media – why three initials for only two words?

A: Listen here brochacho… just kidding of course! Out on the ol’ interwebs people use both “wakesurfing” and “wake surfing”. We feel like since other towed watersports are categorized as just one word “wakeboarding, waterskiing, kneeboarding… etc” it was only right to have wakesurfing considered in the same category. But, for the logo, “WM” looked sort of ‘bleh. Plus, only having two letters seemed very “GQ”, so we decided on WSM instead.

Q: How does the site/social media make money?

A: Lol, this thing actually costs us a ton of money! At this time (June 2018), we have no means of monetary income from WSM. At one time we sold hats and t-shirts, maybe we’ll do that again sometime, but that’s a whole lot of work to net a whopping $5 profit. Instead, we get gear and equipment sent to us from sponsors and friends (and if we’re being honest that’s where any profit would go anyway) so we’re super pumped and couldn’t be happier!

Q: How long have y’all been wakesurfing?

Q: Did you do anything else on the lake before wakesurfing?

Q: What sets you apart from the other content creators out there?

A: [This answer is all Ry since we get this question a lot] – Well, there are many things that set us apart, but here are just a few:

Q: What type of boat do you have?

A: Ah, yes. The Brosetter! We have a 2003 23LSV Wakesetter. This beauty puts out a wave we’d stack up against anything half its age or newer. She has about 300 hours on her, upgraded integrated ballast, EVA non-skid flooring, perfect pass, new interior… the list goes on and on. We’re somehow lucky enough to have friends on our lake that have other boats as well so there’s no telling what we’ll be riding behind on any given day.  We’re totally open to having a boat sponsor, any takers? Huh? Huh? Well, I tried…

Q: What boards are you riding?

A: This is an ever-evolving list thanks to Wake Outfitters, but here’s a partial list of what we’ve been riding:

Q: What’s the best part of running the site/social media?

A: Getting to hang out and talk with other wakesurfers!

Q: What’s been the hardest part of running the site/social media?